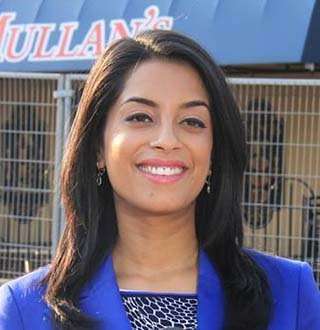 Canadian journalist Priya Mann never missed the chance to show up in an Indian wedding-themed attire. Always stunning and elegant, she just loved weddings. So it just makes her fans hungry with curiosity as to when and how she'll get married!

The Toronto-native rose to prominence as the news anchor of CTV News Channel. After flying over several networks based on varied locations, she has landed at Local 4 WDIV in Detroit, NBC where she exhibits her aura in the profession.

The news anchor has earned a remarkable honor in her journalism career in the form of prestigious Dave Rogers National Award in 2008 for her feature story, Remembering Afghanistan. Another memorable accolade of her career is that she was the first on the ground reporter to cover the aftermath of the 2011 F-3 tornado in Goderich, Ontario.

Priya was born in Toronto and raised in Mississauga although her parents are Indian nationals. She and her brother, Siri have beautifully inherited their parents’ Indian heritage.

She celebrates her birthday on 30 January (Exact age confined). Also, don't you know it's so ungentlemanly to ask a lady's age?.

Standing at an average height of 5ft. 5 inches, she has matured enough to live on her own in Ontario while her parents reside in Carolina.

What Is Priya Mann’s Salary?

Priya is definitely in love with her job! The TV personality’s dedication to work is real. Her journalism career saw the light after she earned a Bachelor's Degree in Communications from Brock University in 2006 followed by post-graduate journalism diploma from Humber College in 2008.

The aspiring journalists’ career took a pace when she got to report voluntarily for the Rogers Television. She sharpened her skills over the years in several networks such as CFJC News, CTV  before hitting the jackpot in Detroit's number one station WDIV-Local 4 in 2013.

Her passionate, creative storytelling spirit has made her a news anchor of preference, and she is paid a salary of $67,000 for her work.

Coming from an Indian background, Priya proudly flaunts traditional dresses now and then. She loves attending Indian weddings maybe because she loves to get dressed traditionally.

While her personal life remains zipped up, she never ceases to turn heads whenever she steps out in a wedding look. Not Getting Married: Priya Mann posted a picture of herself in her mother's wedding sari (Photo: Priya Mann's Instagram;10 Aug 2018.)

It's a no-brainer to figure out her love for the Indian looks. However, to get the credentials she looks for in a guy is not less than a treasure hunt without a clue.

But hey! What are the odds that she will have an arranged marriage-which is ordinary in an Indian culture? Or will she take the road less traveled?