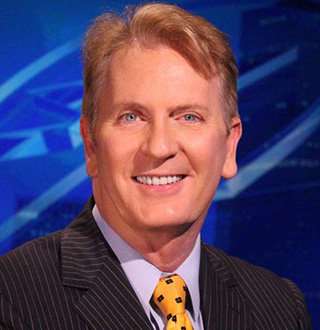 Covering weather reports for over three decades and named as the ‘Ultimate Weathercaster’ by the Houston Chronicle -- Frank Billingsley is most prolifically recognized as the chief meteorologist for KPRC2.

Born on 23 June 1960 Frank Billingsley who is gifted with mesmerizing blue eyes was raised in Alabama in the family of his adoptive parents. He grew up hearing made up stories about his biological parents from whom he inherited those blue eyes; that his mother was pretty & smart and his father was a great athlete.

For almost half of his life, he was determined to find his biological parents. And through rigorous search, DNA tests and explorations he finally found his father and mother. He included this long journey of finding his parents on his book Swabbed & Found: An Adopted Man's DNA Journey to Discover His Family Tree (2017).

Regarding his education, he graduated with an undergraduate degree in broadcast journalism from Washington and Lee University. And later attended the Mississipi State University where he earned the Certification on Broadcast Meteorology in 1989.

He started off his professional career in 1986 by working at WLOX. Then after serving two years at WLOX, he started working at KTRK-TV in 1989 and since then has been calling Houston his home.

In 1995 he finally attained his career highlight when he joined KPRC 2 as a chief meteorologist. And since then his career has bloomed continuously. Between 2013-2014 he also served as a Weather Ecology Specialist at Ecology Communcations Group Inc. As a meteorologist for over three decades based in Houston he is estimated to earn an average salary between $29,679 - $71,424. And with that amount of salary earned it is of no surprise that he boasts a decent net worth for himself as well.

A seemingly dark cloud struck over his bright sky when he got diagnosed with prostate cancer which publicly revealed in September of 2018. But this veteran meteorologist didn’t let the news shatter him. He is hopeful and optimistic towards the recovery oh his health. In a post on Facebook, he shared about the diagnosis to the people concerned over his health stating that:

By sheer luck, my cancer has not spread. Early detection saves lives. Okay, no crying for me, just carry on and, seriously, get checked, okay? I'll keep you posted along this 'journey,'

With a more optimistic approach, this brave man now helps in spreading health awareness about prostate cancer among his viewers.

Moving onto his love life, he isn’t married to a wife but is a married man. He is married to his husband Kevin Gilliard (an HR specialist for Compucom Internet Solutions) for six years and definitely more to go ahead.

For Frank and his husband, the number 12 holds special meaning because the couple got married on 12/12/12. This adorable gay couple, after 17 years of dating, tied the knot on a traditional wedding ceremony that took place in NYC. And this gay couple is not only a family of two, but they share a family of three.

They have a son named Morgan (Kevin’s child from previous marriage) whom they raised together. And they also have a pet named Ocean which is a white schnauzer.

With all the thing going on their way, may the rainbow of happiness always shower upon this lovely family of Frank!