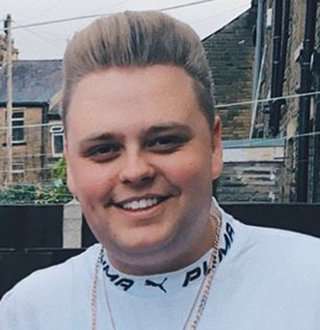 Openly gay British social media celebrity, Nick Crompton, is someone not scared of ending things if they are not working out, not scared of facing the discomfort of the end. If he thought that things were going not the way he likes, he wants out. It happened with both his romantic relationship and his professional partnership.

The Bradford-native is a popular YouTuber, Instagram star, and was an integral part of creative web group Team 10, but his fame mostly comes from his singing, or rather rapping, "England Is My City" in Team 10 leader Jake Paul's song, It's Everyday Bro.

England Is My City: Nick Crompton features on Jake Paul's song as a part of the Team 10 (Published on 30 May 2017)

On 5 February 1995, Nick was born in Bradford, England, from where he completed his high school education.

There isn’t much information about his parents or his family background, except that he grew up together with his younger brother, who name, again, is not mentioned.

Nick's Partnership With Team 10; How It Ended?

Soon after school, on one bored afternoon, Nick picked up his camera and started talking to it about random things, and thus started his journey towards the social media stardom.

Nick’s success in the social media is credible. His own social media persona aside, Nick gained a lot of success with Team 10 as the creative group’s Chief Operating Officer. He worked with both creative and business aspect of the group foresaw its growth into a massively popular group.

One of his achievements, one that brought him unprecedented fame, was his short singing/rapping part in Team 10 leader, Jake Paul’s new song, It's Everyday Bro.

Unfortunately, he left the group in 2018 citing the difference in opinions about the future path of the group. What exactly were the ideas he wasn't comfortable with, Nick did not say.

While he was with Team 10, Nick Earned Massive net worth, the exact sum of which is not known but is bound to grow as he still has age on his side.

Openly Gay Nick Crompton Had Boyfriend, How They Met & Why They Broke Up?

In his personal life, Nick is openly gay and some time ago was dating a North Carolina model boyfriend, Levy Erskine. The gay couple met through Tinder and then connected more and officially became boyfriends via Instagram. Gay Couple: Nick Crompton's boyfriend, Levy Erskine, was introduced in a video by Jake Paul in his channel (photo: youtube.com)

While the relationship lasted, it was very romantic and lovable, filled with birthday wishes and cute gestures. Unfortunately, it didn’t last much. When asked about why they broke up, Nick’s boyfriend said that it was nothing but things not working out for the gay couple.

It was just like his resignation from Team 10, something didn't work, and Nick had to let it go. With such a healthy attitude, Nick Crompton will definitely be very happy in his future projects and relationships.