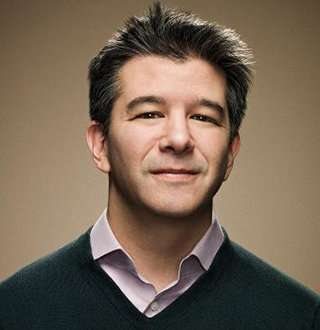 American businessman Travis Kalanick enjoyed an ostentatious relationship with Gabi Holzwarth for two years. He then moved on and was with a new girlfriend who was seldom noticed in the eyes of the media.

The California native is the former co-founder of a peer to peer file sharing company, Red Swoosh, and a transportation network company, Uber. He serves as a CEO of a venture fund, 10100 that focuses on large-scale job creation and a real estate company, City Storage Systems. His riches has shed spotlight on him resulting in his appearances several interviews.

Talk Time: Travis Kalanick talked about how Uber has changed the taxi industry and what the future holds for the company in The Late Show with Stephen Colbert (Published: 11 Sep 2015)

Travis is at utmost career success and relishes net worth in billions.

The successful entrepreneur was born on 6 August 1976 as Travis Cordell Kalanick to parents Donald Edward and Bonnie Renée Horowitz Kalanick. His mother, Bonnie died in a boat accident in May 2017. He has a brother and two half-sisters in his family.

Travis went to the University of California to study computer engineering and business economics, but he dropped out from the university in 1998.

Read Also: Lucy Watson Boyfriend & Family | From Age To Net Worth - All Details

After leaving the university, he started a multimedia search engine, Scour Inc. and a peer-to-peer file sharing service, Scour Exchange with his college mates. After the failure of his first venture, he started another company Red Swoosh in 2001. The company was bought by Akamai Technologies for $19 million in 2007.

In 2009, Travis along with Canadian investor, Garrett Camp founded new venture Uber. He was selected as a CEO of the company in October 2010. And after serving for three years, he resigned from the post in June 2017.

Travis announced through a Twitter in March 2018 stating that he would start a venture fund 10100 which provides large-scale employment opportunities by investing in e-commerce, innovation and real estate in rising economic countries like China and India.

As a successful entrepreneur, Travis has accumulated a massive amount of fortune. He is ranked 115th in the list of the Forbes 400 wealthiest Americans with the gigantic net worth of $6.3 billion.

The former Uber CEO’s popularity as a billionaire has a triumphant career as an entrepreneur, but the backlash is a couple of controversies he got stranded in.

He was trolled as ‘scrappy entrepreneur during  2013 for asking the employees not to have sex with each other provided they are in the same chain of command and for charging a $200 ‘puke charge’ for sick workers.

You May Like: CNBC Veteran Joe Kernen Net Worth & Salary Is Just Massive!

Around the same year, a video of him swearing at Uber driver over fares went viral. That trolled him for his misconduct and left him to be a private driver.

A year later in 2014, he got caught up in a new dispute of pet naming a  service-for- women-on-demand as ‘Boob-er’ in an interview with the magazine GQ. He was using his humor perhaps, but sadly that landed at the wrong place in all wrong ways leaving him to deal with sexist accusations afterward.

Who Is Travis Kalanick's Girlfriend?

As of his love life, Travis was in a relationship with the 28 years old professional violinist, Gabi Holzwarth. The couple started dating in 2014 after introduced at a party hosted by Uber's shareholder, Shervin Pishevar.

After dating for two years, he ended the relationship in August 2016, and the sources suggest that they broke up due to mounting pressures of his work.

After Gabi, he started dating a charming lady named  Angie You. The couple was first spotted in the marriage ceremony of former Uber business chief Emil Michael and his wife Julie Anne Herrin in January 2018.

They attended the weddings held at Miami and were rarely seen on the photographer's eyes.

Travis's has kept his relationship with Angie a low-key as compared to his previous relationship. Sources suggest that  Travis and Angie bought a million dollars townhouse in the upper hills of the San Francisco's Castro section. The lavish house is named "The Jam Pad" which has its own Twitter account.

We Stand And See While They Get Married: Travis and his girlfriend attend Emil Michael's wedding at Miami in January 2018 (Photo: Dailymail)

Travis, who has maintained a low profile, is likely enjoying endearing moments with his new girlfriend.

However, much details about their relationship remain confined. So it's not clear when the couple is getting married.