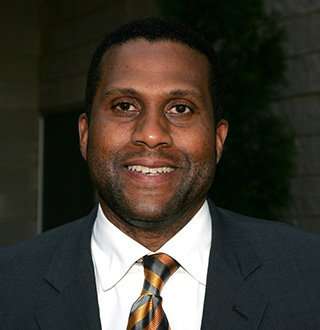 PBS indefinitely suspended Tavis Smiley with allegations of sexual misconduct against him in 2017. Since then, the controversy and lawsuits have not just continued but magnified.

The Gulfport, Mississippi native is an American talk show host and author, best known as the host of PBS late-night talk show, Tavis Smiley (2004-2017). The 53-year-old signed on to host a new online series called The Upside with Tavis Smiley. The show “celebrates the spirit of resilience” and is distributed over various platforms, including Apple TV, Amazon Fire, and Roku.

Tavis Smiley is the son of Joyce Marie Roberts, a single woman who first became pregnant at age 18, grew up in Bunker Hill, Indiana. He was born on 13 September 1964. He stands taller than an average American with the height of 1.85m ( 6.069554 ft).

Tavis and his family soon moved to Bunker Hill, Indiana after his stepdad was transferred to an Air Force Base near there. He welcomed three siblings and four more after the death of his mother’s sister.

The Smileys lived there in poverty hailed trailer home sheltering thirteen, including Tavis and his seven brothers and two sisters as well as the three adults.

However, poverty wasn’t the only misfortunes Tavis had to bear as he was growing up. His stepfather physically abused him - whipping him and his siblings with an extension cord.

You May Like: Laura Coates Bio Reveals! Flaming Married Life With Husband, Escalating With Age

At age 13, Tavis Smiley Falls in Love With Politics

Tavis began to grow fond of politics at an early age of 13. So after graduating from high school, Tavis left home to attend Indiana University at Bloomington, to study public affairs.

He left Indiana University in 1988 to work for Tom Bradley, the first African-American mayor of Los Angeles, through 1990, without the full credits for graduations. He did graduate several years later in 2003.

After an unsuccessful campaign for a seat on the LA city council in 1991, he shifted into working as a radio commentator for an L.A. radio station, broadcasting daily segments about the African-American community.

Following his stint in LA, he was hired as a political commentator on the radio program, The Tom Joyner Morning Show, where he served till 2008.

After spending 13 years on the show, Tavis Smiley on PBS, Tavis found himself at the center of controversy, which saw him lose his job as well as other employees working on the show.

On 13 December 2017, PBS announced that it was indefinitely suspending Tavis Smiley and his show after investigating several complaints of sexual misconduct against the host.

Tavis defended himself with statements in his initial report after the show’s suspension, stating,

“I have the utmost respect for women and celebrate the courage of those who have come forth to tell their truth. To be clear, I have never groped, coerced, or exposed myself inappropriately to any workplace colleague in my entire broadcast career, covering six networks over 30 years.”

Smiley filed a suit against PBS in February 2018, alleging breach of contract as well as accusing the network of being “racially hostile.”. PBS filed back a countersuit in March 2018 against Tavis, seeking $1.9 million in salary and proof about the alleged misconduct that led to his show being canceled.

Tavis, who boasts the net worth of $10 million, isn’t showing signs of giving up and is fighting back the lawsuit.

While confronting Obama candidacy back in 2008, Tavis confessed about his dating life back then. He revealed that he hadn't gotten married and didn't have any kids as well.

“I don’t have kids, because I have tried to be responsible—knock on wood.”

Smiley added that he was a responsible guy and he only went out for drinks for purposeful reasons like concerts, ballgames, plays. He stayed out relatively for a short time only.

The lack of racial diversity among 2016's Oscar nominees generated a lot of controversies. Among many, Tavis Smiley was one of them who attracted a lot of discussions. He stated,

"Let's be honest: the LGBT community has gained more ground in Hollywood over the past decade than Black folk have covered in 50 years. Tonight, we'll see actors who've been nominated for portraying gay characters. Kudos! But why so slow to recognize and revel in the humanity and talent of Black actors and actresses?"

He ended his rant explaining that many black actors deserved a nomination. He clarified that he didn't want black actors as nominees even if they were mediocre.

He said that what Hollywood was doing was wrong, and it needed to change for the better -not just on Oscar nights, but every day.

Is Tavis Smiley's Wife His Co-Worker?

According to researches, many people met their soulmate at the place of work.  Tavis Smiley knows that -which is why he insists he never discouraged employees from dating co-workers -including himself.

Tavis, who was accused of having multiple sexual relationships with subordinates, is vigorously defending himself. From his perspective--it's wrong to ban or terminate employees from dating each other because it's hard to meet someone outside of work when you're solely dedicated to your job and spending your time there.

Despite being the center of many controversies, he's still fighting for what he has built: integrity, respect, and trust. He's still fighting for the ones who lost their jobs on the show. Maybe he will stumble onto his wife-to-be in this battle, and ideally, the two will fight off these allegations!