Tahj Mowry Dating Affairs To Ethnicity; Is He Gay? The Answer Is Finally Here 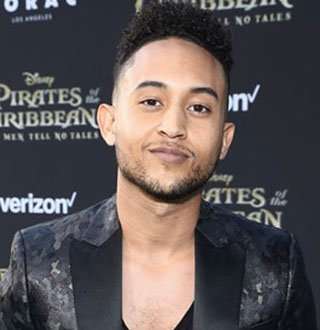 Tahj Dayton Mowry, popularly known as Tahj Mowry, is an actor and singer known for his show, Smart Guy as the main character TJ.  He started acting from the age of four as a guest star on the hit sitcom, Who’s the Boss? At age five, landed a recurring role on Full House.

Moreover, he lent his voice on the Disney Channel cartoon, Kim Possible. Back in 2012, he appeared in the ABC Family series, Baby Daddy as Tucker Dobbs. Adding up, he has appeared in music videos for Prince, Mariah Carey, and Michael Jackson.

As a singer, Tahj released his first single titled Flirt in April 2015 which was produced by Excel Beats.

Tahj Mowry was born on May 17, 1986, in Honolulu, Hawaii, the USA to parents Darlene Renee and Timothy Mowry. He is the younger brother of identical twins Tia Mowry and Tamera Mowry (sisters). Also, he has a younger brother named Tavior. As his father has English and Irish ancestry, and his mother has Afro-Somali descent, he possesses multiracial ethnicity. His mother's afro descent also might be the reason that he has an afro-hair.

Talking about his siblings, his two sisters Tia and Tamera are famously known TV actresses who have worked with big names in the industry. Back in 2000, he got a chance to costar with his sisters, in the TV-movie Seventeen Again.

The 32 years of age Tahj, with a height of 1.68 M, completed his high school studies from Westlake High School in California and attended Pepperdine University where his sisters Tia and Tamera both graduated.

Many people are interested in this young and handsome guy’s personal life.

Back in 2013, Tahj and a girl named Erica Campo were dating each other. Right after being in a relationship, the couple went to Bali for a romantic vacation. But, after the holiday, the couple were never spotted together, neither in public nor in social media. As in now, it seems as though the couple broke up, however, neither of the two has confirmed the news. Vacation With Girlfriend: Tahj Mowry and his then-girlfriend, Erica Campo together on vacation in Bali. (Picture: bossip.com)

Meanwhile, after the supposed breakup Tahj had to face gay rumors out of the blue when he reacted to a few photos of a gay bodybuilder named Andrew on Instagram. Just in the name of liking someone’s picture on Instagram who is gay, he got labeled as gay as well.

Tahj being tired of the gay speculation game on the internet, Tahj posted a Tweet (2010) savagely addressing he is not gay.

Let’s Find Out Net Worth Of Tahj Mowry

Tahj had regularly appeared in Walt Disney's productions: in movies such as Disney Sing Along Songs: Let's go to the Circus (1994) and Hounded (2001). He also got featured in the Disney sitcom, The Suite of Zack and Cody.

Alongside with his acting, Mowry is currently pursuing a career in music. He was featured on 2009 single, Kick it Out, with Flo-Rida and Boom Boom Satellites.

When it comes to his net worth, it is estimated to be around $1.5 million.