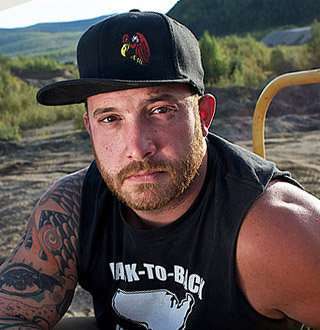 Goldminer Rick Ness looked at the brighter side after having gone through a difficult time and found a mood-lightener through his work in the Gold Rush.

Rick Ness is known as the excavator and rock truck operator on the Discovery documentary series, Gold Rush. The series shows the gold mining efforts of family-run mining companies of Dawson City, Yukon, and Canada.

Here are some captivating wikis on Rick Ness’ age, family, net worth, and his role in Gold Rush.

Born on 5 March 1981, Rick Ness was raised in Milwaukee, Wisconsin, along with his twin brother.

Rick was initially a football player during college, but after a head injury ended his playing career, he opted to start a music group called the .357 Stringband. The band has released three albums over the last seven years.

You May Also Like: Kameron Westcott Bio: Young Age Star Settled, Husband, Net Worth On Point

During a tour around the world, the band was performing at the Southeast Alaskan State Fair when Rick met Parker Schnabel, who leads the crew while finding gold in the series Gold Rush, and piqued interest in working with him.

The 37-year-old miner quickly proved to be a capable excavator and rock truck operator in Gold Rush. He continuously seeks out adventure, and during his free time, he grows his tattoo collection and frequently works out.

Being the main cast of the Gold Rush and taking the show's primary objective as finding gold into account, there is no doubt that Rick earns a hefty amount of money. Though his net worth hasn't been disclosed yet, it's safe to say that gold miners earn millions and more.

Despite the occupying schedule with the show and the occasional traveling to different places, Rick never failed to make more time for his family, especially his mother and twin brother.

The Gold Rush star always shared pictures of his mom on social media sites to show his affection for her. He never missed out special events like his mother’s birthday and shared the moments on Twitter with his fans as well.

He doesn’t hesitate to share the time he spends with his twin brother as well and often shows off his twin on social media. Double celebration: Rick posts a picture with his twin brother during their birthday on Twitter on 5 March 2016. (Photo: Rick Ness’ Twitter)

Even though he often posts pictures of his twin brother, Rick hasn’t yet revealed his whole identity. He might not disclose his family’s identity, but he does keep his fans updated on the happenings of his life with family.

Rick always put heartfelt captions whenever posting any pictures of his mother, often talking about how desperately she was fighting against brain cancer.

While on the set for the recent season of Gold Rush, Rick received the news that his mother’s cancer had returned mid-way and he had to leave his crew to return home for a short time.

And the last time he mentioned his mother on social media was to announce that she had passed away after a long battle with cancer, which wasn’t too long ago. Last Birthday: Rick posts a picture of his mom on Twitter wishing her a happy birthday on 24 January 2018

Rick let the public know about his mother’s death via Twitter on 20 March 2018 and wrote a heartbreaking tweet, quoting,

RIP Mom. 55 years young. She left us peacefully in her house and with my face resting against hers she took her last breath. It hurts. It’s not long enough. Cancer is the devil.

After having gone through countless treatments and therapies, she passed away.

In a talk about his mother with Pop Culture, Rick confessed that he was spending most of his time with his mom as her health was deteriorating.

Starring in Gold Rush where he shows an entertaining role as the right-hand man of Parker Schnabel, Rick makes the series worth watching.

Rick was featured from the second season of the series along with Parker and is still active with his regular appearance.

As an impressive excavator, Rick gained a massive amount of fans and great admiration from the crew’s leader. But he has revealed his plans to lead his own operation, replacing Todd Hoffman as the new Mine Boss in Season 9 of the series.

Mine-Boss: Rick tweets an announcement of his new role in the upcoming season of Gold Rush on Twitter on 23 March 2018 (Photo: Rick Ness’ Twitter)

Leaving the crew was a hard decision that Rick made, considering his close friendship with Parker Schnabel. He even confessed that Parker didn’t know how to be a boss and a friend and that he was fully aware of the difficulty in drawing the line between the positions.

Rick is preparing for his new role for the series and a serious competition for finding gold with his best friend, Parker.

5. How Is Rick Dealing With His Crew On New Season Of Gold Rush?

Rick started the year's mining season with a burden of losing his mother following a battle with cancer. Although he confessed that he had yet to fully process the loss, Rick assured the fans that he would dedicate his skills on the show.

Now that he has a whole new crew of miners to lead, Rick has expressed on his stressful period as the members were all new and admitted on relating to his former mine boss Parker Schnabel.

When asked about his crew members on Pop Culture, Rick said,

They're greener than grass, yeah. They're hardworking guys though. That's why I brought them with me, and they were up for the task.

Rick further boasted about his crew as he confessed on learning together and growing a lot as a team. And taking the leadership role in the mining operation changed his perspective and he started to related to Parker Schnabel more than ever.

While the pair had different clashes over the seasons of the show, Rick understood why Parker was more willing to stay and resolve the problem on any recognized troubles and push backs.

Despite taking on a new role and embracing the loss of his mother, Rick is doing just fine in the new season of the show and is not ready to run away from the problems he faces with his crew or the cast members.