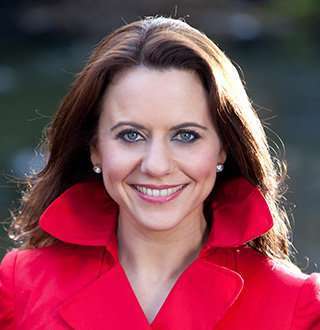 Lucy Kite dedicated her life to ITV and spent more than a decade there. However, she decided to take a break from her successful career as she wanted to experience the previously unchartered aspect of her life.

She is an English journalist and presenter best known for her fourteen years of ventures in the ITV, a commercial television channel in the United Kingdom. At ITV, she worked first as a correspondent before presenting Sky High and Central Tonight.

Lucy Kite’s Bio: More Than One Decade And Half With ITV

Born on 1 April 1977, Lucy Kite is a native of Breaston, Derbyshire. She graduated from Nottingham Trent University in 1998 with a degree in Broadcast Journalism.

She joined as a news presenter and producer on Central Tonight for  ITV Central in January 2002. Four years later, she was appointed as the entertainment correspondent, after which she conducted celebrity interviews and reported for a weekly feature Entertainment Tonight. She also presented Sky High, a regional programme covering views of the Midlands from a helicopter.

On November 2008, she became a fill-in presenter on the now obsolete West Midlands edition of Central Tonight for the following three months. From February 2009, she acted as the weather presenter in the East and West Midlands, while also continuing her work as a news presenter.

In August 2010, she presented the weather forecasts on London Tonight for ITV London. After a successful career in the ITV, she surprised everyone by announcing her decision to step down from her role with ITV in 2016.

Her last day was on 24 May 2016 which saw her leave ITV Central after fourteen years of endeavor.

Similar: What Is Mckinzie Roth's Age? Married Life With Husband To Measurements

Leaves ITV To Focus On Other Endeavors

Running parallel to her stint with ITV was her Yoga sessions. A yoga master, she has also taught Hatha Vinyasa, a form of therapeutic yoga for the past 13 years. Not just that, she has a dedicated YouTube Channel named Lucy Holleron where she regularly uploads her Yoga videos.

Adding to that, she has also worked as a freelance writer, writing lifestyle features for magazine and newspapers. She also hosted events from fashion shows and awards ceremonies to dinners and sporting events including  World Netball Championships, Harvey Nichols Fashion Show, RICS Annual Dinner and St Tropez/Boots Summer Conference.

Having committed herself to her work, Lucy's personal life has mostly remained under the wraps. However, that changed in 2014 when she posted a picture of herself with her Yoga instructor boyfriend Kevin Holleron, on Twitter. Despite having openly pledged her love to Kevin, the couple failed to provide updates about their relationship which led to Lucy being linked with another colleague of hers.

On 21 October 2015, rumors of an engagement with Bob Warman who was her co-host at that time surrounded her. However, she denied the rumors about her being married or engaged to Bob on her Twitter account.

Not just that, she updated her fans on her dating life after posting another picture of herself and her boyfriend Kevin enjoying on a beach in May 2016, silencing the rumors about her life once and for all.

Is Lucy Finally Married? Welcoming New Members To The Family

Five months after her admission of the relationship with Kevin Holleron, the yoga fanatic was again the center of news after announcing that she was pregnant and expecting her first child with Kevin. Lucy enjoys a vacation on a beach with Kevin after leaving ITV Central in May 2016. (Twitter)

The pair welcomed their first born in June 2017, beginning a new chapter of motherhood in her life.

Although there has not been any announcement about their marriage or engagement, she had been providing ample hints about her marital life. She had described herself as a wife in her Twitter's bio. Her Twitter bio reads:

"Yoga Teacher, Journalist, ITV Presenter. Pressed pause on it all to be a full-time mummy & wife."

But then it was all revealed in 12th of April 2018, when Lucy shared a picture of her with her now-husband Kevin finally putting the rumors of her being married to bed. She wrote in her caption that she was thankful for being married.

The cat is finally out of the box. Along with that, her Instagram account is filled with pictures of her spending time with her son, Milo. Lucy and Kevin also together raise two sons from Kevin's previous marriage. The birth of their first son together has brought over-whelming joy to an already happy married life. It can be seen that the pair is over the moon with joy. Love has grown ever so strong in the family of the Hollerons'.