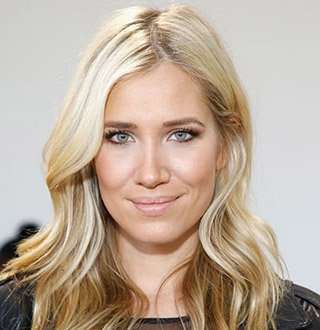 American television host Kristine Leahy swiveled around rumors of her secret relationship with the anonymous boyfriend for so long that people have already speculated her being bound to a husband.

Kristine Leahy is quite known as the host on NBC’s American Ninja Warrior -- a sports entertainment competition featuring competitors attempting to complete obstacle courses to advance on the Las Vegas Strip.

Dating Turnoffs: Kristine Leahy talks about first date etiquette alongside Keri Hilson and Diann Valentine on the Steve TV Show (Published on 14 May 2018)

Kristine Leahy is the former newswoman and co-host of Fox Sports 1’s The Herd with Colin Cowherd and a former anchor for KCBS-TV in Los Angeles.

Born on 16 October 1986, Kristine Leahy was raised in Chicago alongside her two younger brothers during Michael Jordan’s basketball reign. She went to Prairie Ridge High School in Crystal Lake, Illinois and graduated from Boston University earning her bachelor of science in journalism degree.

You May Also Like: Tyra Banks Split Before Getting Married; Photographer Boyfriend Out Of Picture

The 31-year-old host started her career at the sports radio station WEEI in Boston, and after a couple of years, she got the position of an official reporter of the Celtics.com and Boston Celtics.

She eventually got a job at FOX Boston, covering all Boston area sports team. In 2012, Kristine moved to Los Angeles and started wrapping a variety of different sports, and she was most notable as a sideline reporter for Turner Sports’ March Madness coverage.

Working for a variety of CBS affiliated sports outlets along with CBS Los Angeles news, Kristine became the sideline reporter for American Ninja Warrior on NBC. It was in September 2015 that Kristine took a job to join former ESPN Radio host Colin Cowherd on his new show, The Herd with Colin Cowherd.

In May 2017 Kristine received what were regarded as apparent sexist remarks from media personality, LaVar Ball on The Herd with Colin Cowherd. Apparently, he never faced in Kristine’s direction during the whole interview and was only trying to talk with Colin Cowherd on the other side of the studio.

In the argument Kristine had with LaVar about how the Big Baller Brand should market to both women and men, LaVar asserted that his brand was not for women. And when Kristine asked LaVar about the number of shoes he had already sold, he suggested her to ‘stay in her lane.’

Kristine expressed that she believed LaVar was disrespecting women during the segment, to which LaVar responded by calling her a hater for her past criticism of his parenting. He further commented about how she scared him and didn’t want to look over at her.

Kristine responded to her argument with LaVar, saying,

So he was upset at me for what I said there, and that’s completely fine. But you can’t come at me and disrespect me and not look me in the eye and threaten me. That’s just not OK.

The upsetting relation lingered for a long time as Kristine even criticized CNN for inviting LaVar to discuss his dispute with US President Donald Trump in November 2017.

While Kristine hasn’t talked much about her relationships and romantic affairs, there have been several tittle-tattles around her personal life.

Throughout her history of hosting and sports reporting, Kristine hasn’t revealed her mystery boyfriend or confirmed any of her dating speculations. In 2013, she had mentioned in a tweet that she wanted to get some good marital advice, but she was not married.

And in February 2017, baseball player Nick Zammarelli III asked Kristine out on a Valentine date on Twitter, but it just ended there. It was in May 2017 that Kristine was surrounded by talks of her dating personal trainer Aaron Hines. The rumors didn’t set themselves aside as the fans were continually addressing Aaron as Kristine’s boyfriend. In 2017 in an interview with The Glamour, Kristine non-hesitantly mentioned her boyfriend and how big of a fan he was of sports but didn’t reveal his identity.

Kristine hasn’t confessed about anything regarding her romantic affairs so it may take a while to hear her getting married to her hidden-away husband. Adding to that, Kristine has a packed schedule getting ready for her new TV show on Fox Sports’ FS1 network.