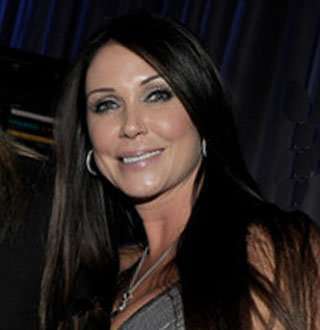 American actress Kristi Gibson spent over a decade with a rockstar. She waited for 18 years to get engaged and she cherished him like her husband. But life has it's own plan for everyone. Some things work out while some just fade away.

As per reports, Kristi was selected in 2018 as a cast of the 2019 Shane Stanley's movie, The Untold Story, an American comedy-drama chronicling a story of a 64 years old bachelor who has had tough times in his career and personal life. Gibson rose to limelight starring in American psychological thriller A Letter from Death Row. The movie was about a convicted killer played by American actor Bret Michaels, who races to prove that conspirators framed him for his girlfriend’s murder.

Bret's character in the movie is a death-row convict using his sole outside contact - an author researching a book about prison - as a last-ditch bid to prove his innocence and win his freedom. The movie got a great review from the critics.

Meanwhile, A Letter From Death Row's behind-the-scenes documentary, High Tension, Low Budget, was released in 1999 in which Gibson was again featured. The documentary gave in-depth look to fans on how the psychothriller was made.

Born on 25 December 1970 as Kristi Lynn Gibson, Kristi grew up in Vancouver, Canada.

Kristi Gibson came to prominence only after her relationship began with Bret Michales- An American musician and actor. Before that, she was unknown to the public eye. Thus, makes it difficult it get any information regarding her parents and her early days.

As time passed by, Kristi's popularity rose to new heights and she has never looked back ever since.

Kristi met Bret Michaels in 1994 and they soon hit it off. They dated for over a decade. During that period, they gave birth to two daughters named Raine (2000) and Jorja Bleu (2005).

On 18 October 2010, the family debuted an American reality documentary television series on VH1 named Bret Michaels: Life as I Know It. The series was followed after Rock of Love - a dating game show hosted by Bret.

Kristi Stood As Rock When Bret Was Hospitalized

Their show, Bret Michaels: Life as I Know It, documented the lives of Bret Michaels and their family. The central premise of the show was the on-and-off relationship that Bret and Kristi shared between them yet nonetheless tried to raise their daughters together in a happy environment. However, Bret’s health troubles suspended the show after his hospitalization was announced in mid-2010.

It was during this time Kristi played a life-saving role in Bret’s life after he was hospitalized for a case of a brain hemorrhage. Not only did she take care of their two daughters all by herself but she also managed to take care of Bret; waiting beside him every day until he made full recovery and was declared fit. He made sure to thank her afterward. The production resumed when he was declared fit by the doctors. The show met its end in late 2010.

Bret and Kristi's Daughter Raine Debuts As Model In 2018

Kristi Gibson's daughter, Raine, broke into the modeling industry in July 2018 as she made a stunning debut as a model. The 18-year-old was chosen out of over 25k women to walk on Sports Illustrated Swimsuit's Paraiso runway at the annual fashion festival. She looked stunning on the runway and is looking to be featured in their annual bikini-clad mag as well. Her Instagram account reached a milestone of over 100k followers after that magical moment.

Is Bret Michaels Kristi Gibson's Husband or She Is UnMarried?

After dating for 18 years with a couple of riffs along the way, Bret and Kristi finally ended up getting engaged. Relationship Goal: Kristi and Bret celebrated 18 years together with their engagement news on 23 December 2010. (Photo: People)

In 2010, everything changed when Kristi was spotted wearing a ring. Their fans were finally relieved and excited for their new beginnings only to realize later that the ring was just a promise ring. However, months later in the same year, during December, Michaels got down on one knee to propose to her, in their VH1 reality show. She waited for this moment for well over a decade, so she didn’t waste a second to say ‘yes!’. A joyous moment at last.

It all looked bright and dreamy for their family in the first year of their engagement. Unfortunately, after two years of being engaged, the pair called off the engagement and separated for good leaving fans and followers sad and heartbroken.

The statement that they issued said they would remain great friends and were committed to jointly raising their daughters. As to why the pair didn't get married remains a mystery. They remain close friends to each other and co-parent their daughters, but neither of the couples has tied the knot.

See Also: Tyra Banks Split Before Getting Married; Photographer Boyfriend Out Of Picture

While Bret Michaels boasts the sum of $18 million worth of net worth from all his reality shows, Kristi isn't that far from his figure either. After starring in movies like A letter from Death Row, sharing the income from the VH1's shows as well, she too boasts a hefty sum of around $15 million.

With a combined high net-worth, the former couple was known as one of the richest couples in the industry.