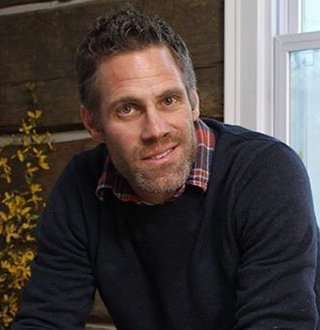 Contractor Jeff Devlin, at age 45, is undoubtedly living his dreams with a beautiful family and a successful career. Jeff frequently posts pictures of his kids and wife on his Instagram account. A bright look at his posts suggests that his family means a lot to him. From the throwback picture of his wedding day to baseball with his son, he loves to flaunt his family.

The host of DIY Network’s Stone House Revival is a licensed contractor with more than 20 years of building experience. Jeff stated he always had a passion for designing, creating and building things. Behind The Scenes: Jeff Devlin's on the sets of his hit show Stone House Revival on 4 April 2017 (Photo: visit bucks country)

Jeff and his team of restoration experts in Stone House Revival transform Pennsylvania properties older than the country into modern living spaces while preserving the home’s historic integrity.

Born on 19 May 1973, Jeff Devlin currently lives in Downingtown, PA. His passion for carpentry began as an apprentice at a historic home remodeler where he developed a deep appreciation for craftsmanship which eventually led him to where he is now.

You May Also Like: Does Eric Villency Have Upcoming Wedding? Family Status After Divorce With Wife

He began his career with his first gig as the resident carpenter of HGTV's Spice Up My Kitchen. Jeff has renovated every area of the home including kitchens, bathroom, and basements.

He has successful television career working as a carpenter on shows like I Hate My Bath, Good, Better, Best…, Spice Up My Kitchen, Ellen’s Design Challenge, Most Embarrassing Rooms and many more. Jeff's love for architecture has led him to accomplish perfection in craftsmanship and success in his profession.

It was not always carpentry for Jeff. Before indulging into his current profession, he worked on television as a cameraman.

When a friend of a friend heard Jeff was into snow sports, he took no time to hire him as an assistant for filming a ski competition.

From then, he learned camerawork and even covered various other sports like mountain biking, drag racing, concerts, and some home renovation programs like Save My Bath.

On 11 April 2018, Jeff shared a picture on Instagram as he openly expressed his overwhelming gratitude to have been able to work with the organization, The Village of Boys Town.

The organization shares the interest to encourage young people and their struggle to grow into productive and responsible members of the society. It ministers to the homeless on the streets and promotes an integration to instill the members to strengthen mind, body, and spirit.

Jeff expressed his happiness to be able to help the organization in the future along with the acknowledgment for Lincoln Electric and Ridgid Powertools. It didn't take long for the organization to respond as they shared the equal gratitude for Jeff who spent his time on campus working with the members and giving examples of where hard work could get them.

Jeff is leading a successful married relationship with his wife, Christine Devil. They are even blessed with a beautiful daughter Reese Devlin and son Aiden Devlin. However, the exact date and location regarding the marriage remain confined.

He is fond of his family because he is blessed with the best. With a successful married life and two adorable kids proving that he is not gay, his bond with his family is close. Despite his busy schedule, he still succeeds to provide the time.

With that Jeff frequently posts pictures of his kids and wife on his Instagram account. A bright look at his posts suggests that his family means a lot to him. From the throwback picture of his wedding day to baseball with his son, he loves to flaunt his family.

Jeff Instagrammed, a picture of his wedding day with his wife 10 May 2013, recalling his special day with the caption

Remembering a very special day in my life!

Apart from that he even posted another picture of his two kids Reese and Aiden who are still at their tender age on 22 June 2015, with a lovely caption “My kids=My world.”

There are many other posts as well dedicated to his family where he shows his love and cares towards them.

Family Pic: Jeff posts a picture on Instagram with his kids, Reese and Aiden on 21 June  2016 (Photo: Jeff Delvins' Instagram)

The way Jeff handles his personal and professional life is commendable. The perfect balance he has created has made the Delvin family grow in each aspect by creating a stronger bond as time passes by.