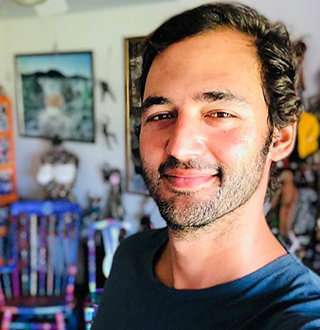 Venezuelan television personality, Jason Silva had the most peerless knack for getting caught up in assumptions regarding his sexuality, but it quickly ended when his romantic affair blossomed on fan pages.

Jason Silva is best known as the co-host of National Geographic’s science television series, Brain Games. He’s also known as a public speaker who has delivered many inspiring speeches regarding the use of technology.

Age Of Technology: Jason Silva delivers an unusual representation of the broader use of technology in a definite asset on his YouTube channel, Shots of Awe with JASON SILVA (Published on 22 August 2018)

Jason has got over 422K followers on his YouTube channel named Shots Of Awe with JASON SILVA with more than 33 million views in total.

He also has a brother named Jordan and a sister named Paulina.

The 36-year-old storyteller graduated from the University of Miami in Coral Gables, Florida with a degree in film and philosophy.

You May Also Like: Katrina Weidman Getting Married? Partner & Supportive Family Talks

Standing at the height of 6 feet 4 inch (1.93m), Jason had a passion for filmmaking and documentation as a teenager when he was inspired by the French poet, Charles Baudelaire’s Hashish House.

Jason produced and starred in the video documentary, Textures of Selfhood based on spirituality and hedonism along with American filmmaker, Max Lugavere.

The documentary gained them a lot of attention from producers who were searching for passionate storytellers. Since then, Jason has appeared on many platforms like Google Zeitgeist, The Economist Ideas Festival, TEDGlobal among many others to share his perspectives.

Jason was a producer on AI Gore’s cable network, Current TV from 2005 to 2011. He co-hosted the show, Brain Games along with Apollo Robbins on National Geographic Channel in 2013.

His net worth hasn’t been revealed, but there’s no doubt that Jason has made millions through his work as a speaker and hosts for different renowned shows.

When it comes to family and especially his mother, Jason melts right away. He has posted so many pictures with his mother with sweet captions that he has gained the ‘momma’s boy’ tag.

He shares a very deep bond with his mother and isn’t hesitant to let the world know about it. Jason As Baby: Jason posts an old picture of his mother holding him when he was a baby on Instagram on 2 June 2018 (Photo: Jason Silva’s Instagram)

Jason is definitely a family person who shares every random moment he spends with his loved ones. He even shares pictures of his grandmother letting everyone know how lucky he is to have gotten to spend so much time with her.

Jason has a soft spot for his mother, and he has undoubtedly shown his affection and admiration for her.

The public speaker has never stepped back to throw his opinions at the crowd. He doesn’t feel the need to hide away when it comes to more serious matters.

Jason is a huge supporter of gay people and their lifestyle. He even made a video exclusively for Gay Star News sharing his thoughts on same-sex marriage.

Talking on behalf of freedom, he confessed his complete support for gay marriage and that the government had no place to ‘legislate love.’

He even aired a special segment for gay right in the show, Max and Jason in 2009 that he co-hosted along with Max Lugavere.

And not surprisingly, many assumptions rose regarding Jason’s sexuality and if he’s a gay as well. But, the rumors dissolved soon enough as he denied the rising speculations.

Before moving to the talk about weddings or marriage, Jason hasn’t even revealed his romantic affair.

There was a time when he was romantically involved with American actress, Heather Graham in 2011. The two were adorable together but later split ways in 2013 without announcing the reason.

After that, Jason hadn’t been seen with anyone until a fan page on Twitter posted a picture mentioning his model girlfriend, Valerya Averbuch. Upon taking a close look at the photo, the two seem to be in a live-in relationship. Though Jason hasn’t officially announced it himself, he may introduce his future wife to his fans sooner or later.

So, considering the fact that Jason hasn’t yet made his girlfriend official, it may take a right amount of time before he talks about his possible wedding or future married life with his love interest.