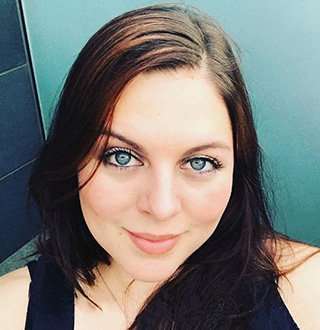 American paranormal investigator, Katrina Weidman made a huge announcement of getting married and spending her life with a mystery partner.

Katrina has also hosted the documentary series, Real Fear. The paranormal researcher also stars alongside Nick Groff in Destination America’s Paranormal Lockdown, which is set to air its third season from 30 August 2018.

Born on 2 March 1983, Katrina Weidman was raised in Bucks County, Pennsylvania along with her sister. She graduated from Pennsylvania State University with degrees in Integrative Arts and Theatre along with a minor in music technology.

Having grown up in a haunted house, Katrina carried a passion for the supernatural from a young age. She started working as a case manager for the Paranormal Research Society in 2006.

The ghostbuster aged 35, then, had the opportunity to become a co-host on Paranormal State in 2007, which later led to Katrina to serve as the host for Chiller’s Real Fear: The Truth Behind the Movies.

In the present time, Katrina is working on the project, Paranormal Lockdown with paranormal investigator, Nick Groff. The show follows the two as they investigate haunted locations for straight 72 hours.

Not everyone has the family’s back when choosing a career path that isn’t widely appreciated. But, Katrina had more than enough support and love from her family regarding her work and career as a paranormal investigator.

Even though she hasn’t revealed her family member’s identity, Katrina did share a picture of her late grandmother on her birthday. Never-Ending Love For Family: Katrina posts a picture of her late grandmother with a heartfelt caption on Instagram on 11 December 2016 (Katrina Weidman’s Instagram)

In a wide-ranging talk with TLC, she explained her family’s opinion on her work saying,

My mom’s side of the family has always had experiences so they weren’t shocked. My dad is happy as long as I am happy and can pay my student loans!

As much as Katrina has the support and love from her family, she doesn’t seem to want any trouble for her family regarding their privacy.

The same goes for her boyfriend’s identity, who occasionally shows his face on Katrina’s social media sites.

Katrina Got Engaged To Mysterious Partner In 2018

Even though she isn’t necessarily secretive about her partner, Katrina has yet to reveal his identity. She had been mentioning about her boyfriend in her tweets and Instagram captions a lot for a while.

Then, the paranormal investigator dropped the picture of her engagement ring on Instagram out of nowhere. Partner for Life: Katrina posts a picture with her fiance on Instagram on 7 August 2018 (Photo: Katrina Weidman’s Instagram)

Katrina let her followers know that she got engaged on 4 May 2018 in the caption of the picture, where she showed off her engagement ring. She hasn’t revealed anything about how she met her husband-to-be and about the development of their relationship, but she does share his pics on social media.

And although she does post pictures with her future husband, Katrina steps away from revealing his real name and identity.

Although she has delved into details of her engagement, Katrina hasn’t announced if she’s getting married anytime soon. This, however, is not the first time she has courted attention because of her personal life as she was a fixture in gossip mags in 2010 for her tweets regarding husband and getting married.

In 2010 Katrina was into the news for her humorous takes on marriage. In May 2010 she tweeted that she got married a few months ago and even hinted that she could have found herself a partner stating 'When You Know You Know.' However, she backtracked from her claims about getting married and having a husband five months later saying it was a huge joke.

This time though it seems it is real. It seems only a matter of 'when not if' the lovebirds are tying the knots!