Home » Entertainment » Christian Keyes On Strict Rules! Be It Girlfriend Or Wife - Getting Married On Terms
Share

Christian Keyes On Strict Rules! Be It Girlfriend Or Wife - Getting Married On Terms 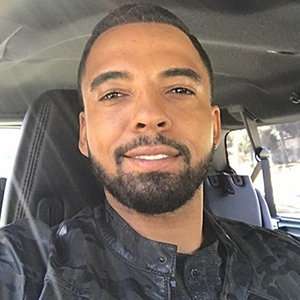 American Actor Christian Keys, in the past, has never shied away from the possibility of having a wife one day. He seemed to be in search of one, right now and he has stipulations that need to be met by his future wife.

The 42-year-old actor from Detroit is best known for portraying the role of the character named Levi Sterling in the Bounce TV primetime drama Saints & Sinners. People recognize him for his part as Slim in 2015 film The Man in 3B. Because of his chiseled body and down to earth nature, fans and colleagues alike have taken a liking to him. As of July 2018, over 290k people follow him on Instagram.

Exclusive!:Christian alongside co-star of the BET show In Contempt host HipHollywood special (Published on 10 April 2018)

At present, the Detroit native can be seen in a starring role of Charlie Riggs on BET's legal drama In Contempt.

Before pursuing a career in acting, he appeared on various stage productions and was a full-time fitness trainer. Christian, who stands at the towering height of 6 feet 3 inches (1.91 meters), had also modeled for some fashion outfits.

In 2005, the former fitness trainer landed a role in the Tyler Perry-produced film titled Diary of a Mad Black Woman, marking his on-screen debut. 2005 also saw him release an album titled Day By Day.

Between 2007 to 2010, he made several guest appearances on TV: Brothers & Sisters, Family Time, Instant Mom, Born Again Virgin and Beauty and the Beast, to jot down a few.

Besides working on TV shows and movies, he has also starred in music videos for the likes of Keri Hilson and Ashanti.

For all his endeavors in show-biz, the 42-year-old has amassed $1.5 million net worth.

His Bio: Parents Put Him For Adoption

Born to interracial parents, Christian grew up in Flint, Michigan. He was born on 24 July 1975 in Detroit to mixed-race parents. His father was an African-American while his mother, American-French.

Adopted twice as a child, he was put up for adoption by his parents. He even took to his Twitter to reveal the dark side of his childhood in August 2010, stating that he used to be so afraid of being a father as he did not have one.

Further, he added that he is thankful for his rough childhood that made him a better parent.

Initially, he wanted to make music but later shifted his interest to acting, which leads him to join acting classes while attending Ferris State University.

No History Of Long-Term Girlfriend Makes Him Gay?

The trainer turned actor was once rumored to have dated Baje Fletcher. His one-time girlfriend, Baje is an American actress.

Because he never shows off his girlfriends on social media, people assumed him to be a closeted gay despite never portraying himself as one. He has maintained his heterosexuality but asserted he loves the support from the gay community.

He has a son, Christian Keyes Jr. Information as to who mothers his son is not public knowledge as he rarely chimes on the topic. He’s not married to his son’s mother as he has repeatedly boasted not having a girlfriend in interviews.

Christian often prefers to spend time with his son, who will be 16 years old in December 2018, and they share a consummate bond with each other. Moreover, he recently uploaded a video on his Facebook, teaching his son how to shave in August 2018.

Well, it looks like he is not satisfied and wants to add more to his family.

Talking to the interview with Rollingout.com in May 2018, he stated that would like another child to adopt as he was adopted twice. He also gave a small clue that he is looking for a perfect wife to do all of that, but he is not going to rush into anything.

In November 2013 speaking to Youtuber C Nikky at the premiere of the movie Best Man Holiday, the Saints & Sinner star confessed being ready for a wife when God sends him one.

Rolling Out in May this year did a digital cover on him. In the insightful cover/interview, he let the world know that he wants a wife, calling it a ‘top priority’ right now. He further broke down the traits of his would-be-wife as someone who wouldn’t walk around half naked showing off her ass cheeks, camel toes and areolas on social media. Draped In Pink: Christian, a father of one, poses for May 2018 digital cover edition of Rolling Out (Photo: rollingout.com)

The All Men Can’t Be Dogs star emphasized on wanting a wife who would ‘bring a table to sit next to his table’ as opposed to someone who would use her ‘sex appeal to bag a millionaire.’

The Detroit native further delved into wanting to adopt a son with his future wife. He also spoke on hookup culture, labeling it ‘wrong for me.’

That's asking a lot. But then again, why should a man of his stature settle down for any less, right?