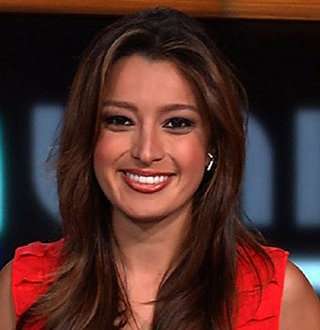 Mexican native Antonietta had been in a long-term relationship with her professor boyfriend. He was the source of motivation for her to pursue the career of journalism.

Open Thoughts: Antonietta Collins joins The Fantasy Show with Matthew Berry and gives her love/hate on football, DMs and more (Published on 28 September 2017)

Antonietta started her career as a production assistant at Univision Broadcasting Company in 2007. During the time, she used to collaborate with producers of national programs such as Nuestra Belleza Latina, and Premios Lo Nuestro.

Joining Univision’s Noticias 48/FOX2 news team in 2009 was the milestone of her career where she had the first on-camera job in news reporting.

Antonietta joined ESPN in September 2013 as a part of the Digital Media team. Initially, she was involved in enterprise reporting and interviews for features.

She also appeared as a guest-host ESPN’s night show, Baseball Tonight. Moreover, she hosted One Nación on ESPN Deportes. Later in 2016, she was promoted to SportsCenter news anchor and presently serves on that position.

Antonietta derives an impressive amount of salary from ESPN as she has been associated with the media for nearly a half-decade.

As per glassdoor, ESPN journalist salary can range from $52K - $60K per annum. So, Antonietta as a news anchor of the network is likely to receive the same. Being one of the renowned reporters, she also dedicates her time to awareness programs and charities.

The prominent sportscaster was born on 22 November 1985 in Mexico City to mother Maria Antonieta Collins, an award-winning journalist and author. Antonietta, whose family was originally from Veracruz, moved to the United States at a very young age. She grew up in Miami along with her elder sister.

Her parents divorced soon after they moved and in 1995 her mom married a naval architect, Fabio Fajardo, who passed away of kidney cancer in 2006.

Antonietta, who stands at the height of 1.57 meters (5 feet 1 inch), was a talented youth football player and contributed two years with the U19 Mexican national team.

Dual citizenship holder, Antonietta graduated from a Mount Union College in Alliance, Ohio, with a Bachelor of Science degree in Communications, with importance in Sports Management and later entered the sports business as a production associate at various TV and radio stations in Florida.

The anchor shares an affectionate bond with her parents. Antonietta and her mother is a mirror to each other in so many ways and even share the identical name with a different spelling. They are occasionally seen at various events together.

She also posted a family picture in May 2018 quoting with the Chicago family. She mentions her late father on her Social media. Back in 2017, she wished her father a happy birthday stating that she misses him every day. And Antonietta doesn't hold back while sharing old pictures of her father, constantly reminding her fans that she embraces a beautiful bond with a person who is no longer in the world.

On 15 November, the sportscaster posted an old picture of herself as a kid and her father on Instagram and the caption was a beautiful quote from a movie,

You only die when you're forgotten, and I never forget you

That was really beautiful and the comments were filled with love for Antonietta. Some people even shared their relatable loss and spilled good words her late father suggesting that he must have been a wonderful model for his daughter.

Not just her father, Antoniette often shares old pictures of her mother as well.

Interesting: Tamara Braun Married Co-Star, It's Not Her Husband! Lesbian Of Sorts? How Adorable: Antonietta posts an old picture of herself as a baby and her mother on Instagram (Photo: Antonietta Collins' Instagram | 2 November 2018)

While Antonietta is pretty open about her love for her family, she doesn't share the same view for her love life.

Is Antonietta Married or Still Single? Quite a Mystery

The newscaster, who is currently unmarried always has her love life a mystery. There is not much news or gossips about her being involved in a romantic relationship with any boyfriends.

However, as per the article published in 2017, she was in a long-lasting relationship with her professor Mark Bergmann. Her husband-like boyfriend, Mark was the manager of WRMU 91.1 FM at the time, and she was a member of the station.

Mark encouraged her to be self-confident and was the one to motivate her career in journalism. Since then there are no any further details about their relationship affairs.

So, until and unless she opens up about her relationship status it's difficult to say whether she is single or is committed to her boyfriend, Mark.