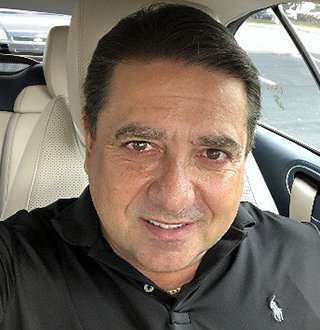 NYPD detective, Steve DiSchiavi, always wanted to do good in the community, put away bad guys, and give relief to the victims. So, when he retired from the force and working against living criminals was out of his jurisdiction, he started to work against dead criminals.

The Brooklyn native is a decorated NYPD detective but is mostly known for being the paranormal investigator in the Travel Channel Show, The Dead Files.

Steve, age 56, stands not that tall for an NYPD officer, standing at the height of only 5 feet 8 inches. His bio reads like a person's whose thirst could never be quenched no matter how much water he drank, water, in this case, being justice.

Steve DiSchiavi Bio: Wants His Deceased Father To Feel Proud Of Him

Steve DiSchiavi was born on 1 May 1964, in Brooklyn, New York City. Raised in a loving family, Steve always wanted to make his parents proud, but his father died when he was only a teenager before he could see his son grow up into a fine, successful man.

And Steve did grow up to find not only become a successful man but also a great human being and had his old man been alive; he would have definitely been proud of him.

Steve Spent 21 Years In NYPD, Serving The City He Was Born In

Always wanting to lessens the problems in the society, wanting to reduce the crimes, wanting to give justice to the victims, pained by the trauma caused to them, Steve joined the New York Police Department. With his skills, abilities, and most importantly empathy for the people, he soon was made a Detective.

As a detective, Steve spent 21 years in the department, preferring to work the cases instead of rising through ranks to more supervising jobs. And in those 21 years, Steve served the city of New York with all the dedication and courage he could muster.

Steve Continued Serving After The Retirement

Since Steve's hunger for justice wasn't quenched, could never be quenched as long as injustice remained in the society, he joined hands with a paranormal psychologist and a physical medium, Amy Allan, to work on paranormal cases for the Travel Channel's paranormal show, The Dead Files.

For The Dead Files, Steve uses his abilities as a detective and Amy uses her ability to feel and talk to the spirits to get to the root of what exactly is wrong and find the ways to relieve the families troubled by the paranormal activities.

His service against crime has not only given him satisfaction but also earned him a massive net worth.

Steve DiSciavi Is Not Married, Rumored Wife Is Only His Friend

Busy solving crimes of the outer world, Steve sometimes becomes victims of petty crimes himself, in this case: of spreading false information.

At one point somebody posted a bunch of false information about Steve, who in turn posted on Instagram refuting all those claims, and revealing much about his personal life. In his Instagram post, he revealed that the information posted about him were completely false and untrue. He stated that he was a divorced man who currently lives in Florida by himself. However, he has always shied from revealing the reason behind the failure of his previous marriage. Steve also reveals that he has a daughter who is currently practicing her tax attorney. He goes on to further state that the woman speculated to be his new girlfriend is his none other than his friend Morgan Fairchild.

But all might not be what it seems. From taking a look into Steve's social media platforms, especially his Twitter, it can be seen that Steve has a girlfriend, details about who he has kept hidden. It might just be a matter of time before we get to see Steve all suited up for his wedding day.

He might have refuted the falsities of his married life, but such a thing happening to the person who has fought all his life so that such things never happen to anyone else is rather unfortunate. But regardless of that, just like any other case's Steve has undertaken, he fought through it came out victorious. It's what he does best.