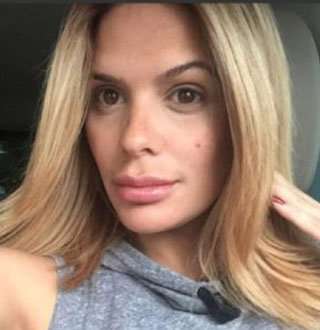 A Miami cocktail waitress, Monique Exposito became a famous personality overnight after her link up with the former American football running back Reginald Alfred Bush Jr aka Reggie Bush who was married to Lilit Avagyan.

She became a topic of gossip when her pregnancy news with Reggie Bush's child circulated in the media. She was criticized for having an alleged relationship with a married man when she was already legally married to  Alexandre Bastin.

Nobody would have ever imagined that a simple cocktail waitress, Monique could become popular overnight. But it’s not that Monique never tried to famous.

There was a time in 2013 when Monique attempted to participate in the reality show Ultimate Miami Girl but couldn’t succeed. Her attempt to get engaged in the reality show somehow implies her desire to become a celebrity. However, she gained limelight not the way she might have wanted to; Monique carrying Reggie's child.

Monique was only 34 when her pregnancy news circulated in media (2016).  This means she might be around 36 as of 2019. Besides this, her other personal info and where about is still a mystery as she is not active in any social media as well.

Monique was having a romantic affair with Reggie until she got pregnant with a Reggie's child. Reggie was trying to avoid future troubles so he offered Monique 3 million dollars in exchange for her silence and abortion. But she didn’t keep her promise and decided to keep the child.

The pregnancy news affected both Exposito and Bush's family. It was shocking for Reggie as he had paid a huge sum of money to avoid this very situation.

Learn About: MSNBC's Chuck Todd & Wife Controversy! Something To Rift Them Apart?

Couple and Mistress: Reggie Bush with his wife Lilit along with Monique during their controversy (Photo: bossip.com)

While people were surprised and wondering how on earth his wife Lilit Avagyan stayed by his side smiling through the whole ordeal Lilit getting pregnant was assumed to be the reason behind the intact to her marriage.

Moving on to Monique's married life, she wanted Bastin to support her and take care of her child. But Bastin wasn’t ready to take any responsibility for an unborn.

Later, the French restaurateur Alexandre filed for divorce in January 2017 by saying he had an irretrievably broken. So Monique had to separate on terms to free Bastin from alimony duty with their assets and debts split in the Miami-Dade Family Court.

And on 5 February 2017, Monique gave birth to a baby, Preston Alexander Exposito at Mount Sinai Medical Center in Miami. Although the baby Preston was the result of an alleged relationship between Monique and Reggie, Lilit stayed strong and didn’t let the alleged child come between her and Reggie.

You May Also Like: Demetria Obilor Age 27 Bio: Rising From Controversy, Is She Married?

Previously Monique was claimed to get future child support from Reggie. But, he denied taking any responsibility for his unborn biological child. Also, according to the Florida Law, he was not obliged to provide for his biological son. As Monique was still intact by a legal marriage to Bastin, which made Bastin a legal father to the unborn baby.