Caitlin McHugh, Wife Of John Stamos Wiki: What Is Her Age & Ethnicity? 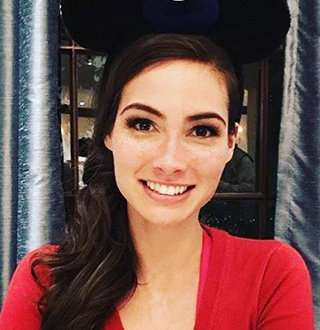 It was the desire of making a family of their own that bonded American actress Caitlin McHugh with her husband. A dream of having their own little uns' running around in the house, wish to see tiny fingers of their own flesh and blood curled around their own long slender fingers that forged a bond between them.

The California-native is mostly known among the masses as the wife of Full House star John Stamos and for her recurring role in The CW's popular American supernatural drama, The Vampire Diaries.

Here are some mind-blowing wikis and facts about John Stamos's wife and Vampire Diaries actress, including her age, height, birthday, ethnicity, parents, nationality, and net worth.

On 13 May 1986, Caitlin was born to parents Leilani and Timothy McHugh. While her father is of Irish descent, her mother has Filipino ethnicity.

After graduating her high school from, Flintridge Sacred Heart Academy in La Canada Flintridge, California, Caitlin went on to study contemporary dance at University of North Carolina School of Arts.

Caitlin stands quite tall at the height of 5 feet and 8 inches, wiki sources say.

2. How Caitlin McHugh Earned Her Net Worth?

Shortly after college, the actress of American nationality started her journey into the sparkling world of Hollywood with a minor role n 2007 post-apocalyptic science fiction, I Am Legend. After appearing in a few minor roles over the next few years, she got her big break with The CW’s supernatural drama, The Vampire Diaries.

Now, a little more known around the industry, Caitlin went a little bold and wrote a romantic comedy, Ingenue-ish, with Full House star John Stamos, who also starred alongside her in the movie.

The very John Stamos would later become the husband of Caitlin, but more on that later. For now, wikis tell us that Caitlin shares a massive net worth of almost $ 20 million with her husband.

3. Desire To Start Family Bonded Caitlin With Her Husband

Before the professional and personal partnership was forged, Caitlin met John Stamos in 2011 while filming an episode of Law & Order: SVU. But that was only a professional co-incidence and they didn’t actually meet until Caitlin’s roommate was cast for Full House, in which John Stamos was the star.

What bonded Caitlin and John, after meeting all those years later, was their shared desire for kids and family. John Stamos was often deemed by co-stars as someone born to be a father, but he had not been able to find the right partner to start the family with—until Caitlin.

The two started officially seeing in 2015, and after a couple of years of what could only be called a whirlpool affair, the two got married. But more important than marriage is their engagement. Apparently, John literally pulled a proposal right out of Disney’s fairy tales that Caitlin couldn’t deny even if she tried. Caitlin & Husband: Caitlin and her husband, John Stamos, have been together for over three years now (photo: goodhousekeeping.com)

They were engaged in October 2017 at the Disneyworld, with the background of a romantic video collage of scenes from Disney and Pixar’s animated movies. The couple got married on February 2018.

So eager were the two to start a family of their own that only after two months of getting engaged, and before the wedding, they announced that they were pregnant with their first child.

Their first son, Billy, was born on 15 April 2018. But the couple was not going to wait for Billy to grow to an older age to start trying for his younger sibling. With young aged Billy taking all their time, however, they haven't been successful yet.

Not even 1 year of age, Billy might be a fussy little child for now, but with loving parents like his, he will definitely grow up to become a great man. Meanwhile, his parents are bound to squeeze in a little time from their parenting and work for another child.