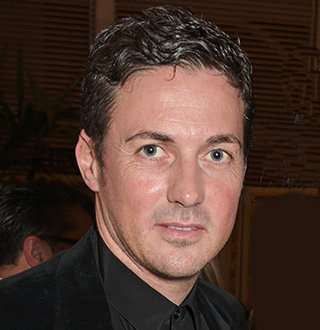 Despite going through a traumatic divorce, Dave Gardner was open for love again. Dave's second foray into the dating game struck the gold, after finding a perfect partner for life.

The 41-year-old is a sports agent who has some high profile celebrity footballers in his books including David Beckham.

He was also a junior player for the Manchester United club.

Dave Gardner was born on September 17, 1976, in England and grew up harboring a dream of playing professional football. He as every other kid in the UK dreamt of being a footballer and started in his quest for the top with the biggest team in the world, Manchester United.

He joined the academy as a 14-year-old but was unable to persuade then Manchester United manager Sir Alex Ferguson to give him an official contract.

But was not the end of the world for Dave, in fact, it was a new beginning for him and his successful career.

After failing to secure a playing career, he turned towards nurturing young football talents as a football agent along with Jason Ferguson, Sir Alex's son.

The duo set up football agency Elite Sports and had several high profile names in their books including David Beckham. David Beckham is not only his top client in the agency but also his very good friend. He shares several pictures with the retired football star and they share a strong bond of friendship. Dave was on his own after Jason was embroiled in a scandal and had his license rebuked. Despite the setback, Dave kept on going and is now one of the richest agents in the world of football.

Despite not being successful to transform from academy to professional football, he kept up his contacts with celebrity footballers.

Not only did football introduce him to the celebrity lifestyle, but he also mixed up with the Hollywood royalty and was granted membership at the Kate Moss' social club, where he met an actress Davinia Taylor, his wife-to-be.

English actress Davina is a daughter of Alan Murphy, known as the "Loo Roll Millionaire", whose net worth is around £180 million.

The couple began dating in 2002 and got married in a lavish ceremony in 2003. Dave and his wife had their first child, a son Grey born seven years after the wedding.

However, Davinia's party-loving lifestyle led to fractions between the husband-wife pair, and Dave cited her irrational behavior as the reason after filing a divorce in 2011.

The acrimonious divorce saga ran for full two years and led to Dave being awarded the custody of their son and a hefty divorce settlement, boosting his net worth.

Dave moved on from Divinia and found love again with actress Liv Tyler, daughter of Aerosmith frontman Steven Tyler. The duo started dating in early 2014, after being set up by Kate Moss. The duo had an instant connection with each other. The Mirror quoted a source saying the couple was a real deal and had got hooked for life. And in 2015, the couple expanded their family from four to five after the birth of a son, Sailor Gene Gardner a year after they started dating.

Similar: Does Eric Villency Have Upcoming Wedding? Family Status After Divorce With Wife

The couple already was parenting two kids, Dave's son Grey born to Davinia and Liv's son Milo born to her ex-husband Royston Langdon before the arrival of Sailor.

Postpones Wedding After Wife-To-Be Gets Pregnant

The birth of Sailor resulted in the decrease of distance and increase in love between the pair, with the couple unafraid to flaunt their love in public.

The couple decided to give a name to their relationship and got engaged in September 2015. The couple had already formulated plans for their wedding after their engagement. However, the imminent arrival of their second child, daughter led to the postponement of their big day. And the couple duly welcomed their second kid, a daughter Lula in July 2016. And in August 2017, Liv stated that the couple has always wanted a family and a loving partnership. Dave shares a very close bond and is very fond of his children and often shares pictures with them. He also takes his children to football with him in the stadium.

Are Dave Gardner and Liv Tyler Married in 2018?

Since they postponed their wedding plan, fans have been curious about their special day to take place. But when is the question? The couple is engaged but still not married, as Dave's wife Liv stated in an interview with E! News in 2016 when asked about their wedding date she said that:

Well its quite understandable that they're busy with taking care of their two beautiful children plus juggling work life too.  And after all, when you love one another wholeheartedly it's more than enough, marriage right now is not a rush for both Dave and Liv.

Dave Gardner Boosts Net Worth Through Divorce And New Pairing

Keeping the exact sum confined, Dave is thought to have a net worth of millions, as he is one of the most successful football agents. His contracts with celebrity footballers allowed him to remain in the game as an agent where he has carved out a successful career.

Moreover, his net worth increased after his divorce with Davinia. The financial settlement between the former couple was made in July 2010. Dave was awarded a settlement in the region of £1million by his ex-wife. Moreover, Davina lost the custody of her son with Dave, Grey now 10 years old. Subsequently, Dave was awarded the custody of their son and spousal support worth millions, which further boosted his net worth.

Talking about his current partner, Liv has a net worth of $20 million. The duo bought a lavish £11.25million London home in West London in November after Liv stated her desire for a family with Dave.

The house is located near to Dave's friend, David Beckham's home. The four-story townhouse is comprised of the mid-century furniture, lavish chandeliers, feature walls, and art deco floors.