Home » Sports » What Is Akbar Gbaja-Biamila Net Worth & Who Is His Wife? Is She Muslim?
Share

What Is Akbar Gbaja-Biamila Net Worth & Who Is His Wife? Is She Muslim? 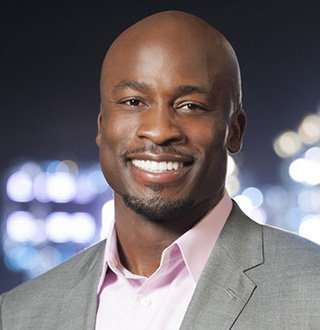 NFL’s sports analyst Akbar Gbaja-Biamila was born in a Muslim family but later followed Christianity. Before turning into a Christian, he had always been searching for integrity and connection with God within himself. And he was lucky enough to find what he searched for, not all by himself but it was actually by someone special in his life.

Akbar Gbaja-Biamila is a well-known former American professional football player who played for San Diego Chargers, Oakland Raiders, and Miami Dolphins. Currently, he works as a sports analyst for NFL Fantasy Live and co-host for the show American Ninja Warrior. He has also worked as an actor for the short film The Sac Fly (2015), Funny or Die skit Internet Cops with Nnamdi Asomugha.

You May Want To Know: Whats Is NFL's Rebecca Haarlow Age & Who Is Her Husband? Bio Unveils

Born on 6 May 1979 at L.A  Akbar Oluwakemi-Idowu Gbaja-Biamila belongs to a family of Nigerian ethnicity. He grew up alongside six siblings and his late Muslim parents.

His mother converted to Christianity while his father remained a Muslim. His family went to both Mosque and Church which has helped him become more compassionate about others religious beliefs.

With a height of 7 feet, the football players first passion was basketball. He was even part of Crenshaw High School’s varsity team. But later due to the pressure of coaches and his elder brother Kabeer, he tried out his luck on football which was definitely a great decision he made.

His excellence in football even provided him a scholarship at San Diego State University. There he graduated with a degree in communications and new media studies.

Akbar started his professional career as NFL’s linebacker and defensive end for three different teams. He served as a professional football player for five years and retired in 2008.

Despite having a bright career in football, he was always interested in broadcasting. To fulfill his interest, in 2005, he got selected and attended NFL Broadcast Boot Camp.

After that, he made his way to the broadcasting career and served an NBC radio affiliate KSWB in San Diego. He also co-hosted Football Night in San Diego from 2006 to 2008.

Then he worked as an analyst for CBS and Mtn.Network before joining NFL network as a member NFL Fantasy Live in 2012.

Akbar is very well-known for his humorous description of actions on the show. The American Ninja Warrior host in 2018  took part in the second Celebrity Ninja Warrior on the occasion of Red Nose Day.

Ninja Warrior Kevin Bull trained him. From the particular segment, he was able to raise $30,000 for children in need all over the globe.

Akbar has made his mark as a professional football player, TV show host and as a sports analyst as well. As per Forbes an NFL player earns an average salary of $2.1 million, which is a lot.

Focusing on his current jobs, according to Indeed, he earns an average salary of $65,522 per year as a sports analyst. While, as a host for American Ninja Warrior he definitely earns pretty good as well.

Overall, accumulating all his salaries and earnings, he boasts a net worth of $7 million.

He is married to his wife Chrystal and shares a family of six with four beautiful children. Christian Couple: Akbar Gbaja-Biamila with his wife at The 2014 ESPYS at Nokia Theatre L.A. (Photo: Zimbio)

When he was struggling with his identity and religious beliefs, he met his wife, Chrystal. While he was dating, his wife confessed that Akbar was everything she wanted in a man except that he didn’t have a relationship with Jesus.

This led Akbar to believe that his wife was like all other Christians. But later he saw that his wife’s relationship with God was real, it was a pure kind of bond. The lost Akbar trying to find truth in his identity found this bond enlightening.

After this, he started reading the Bible and realized that he truly felt connected with God and hence converted from Muslim to Christianity. What a happy ending!