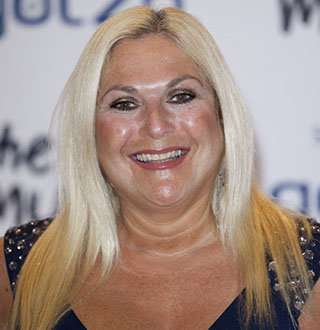 British television personality Vanessa Feltz was rumored to have tied the knot in a secret wedding after a long relationship of 12 years with her boyfriend- who is 10 years younger than her. But how true were those stories?

The Islington, London-native is a British television personality, a freelance broadcaster, and a journalist. She is well-adored from the famous British Show, Celebrity Big Brother and her morning radio show, BBC Radio 2 Early Breakfast Show.

Vanessa & Feltz: Vanessa talking about her relationship with Ben on Loose Woman (Published on 19 June 2018)

Vanessa is also an actress, known for her roles in movies like Once Upon a time in the Midlands (2002), Dick Whittington (2002) and The All Star Impression Show (2009).

Vanessa Feltz was born on 21 February 1962, in Islington, London, to British parents, Valerie and Norman Feltz. She spent her childhood in Pine Grove, Totteridge.

Feltz, who stands at the height of 5 feet and 2 inches, got her early education from Haberdashers’ Aske’s School for girls. After that, she graduated from Trinity College located at Cambridge with a first-class honors degree in English.

The Islington native embarked on the path of a journalist after graduating from her university in the early 1980s.

She became one of the first columnists for the Jewish Chronicle- a British weekly newspaper before going on to work briefly for Daily Mirror (exact date unknown; believed to be in her starting career i.e. the early 1980s)

You May Like: Is Veronica De La Cruz Married With Husband? Personal Life Insight With Son

Vanessa went on to work for various TV shows like Channel 4’s The Big Breakfast and ITV daytime TV show Vanessa. After gaining popularity, the show was later moved to BBC with the name, The Vanessa Show, in 1998.

Later Feltz joined BBC London 94.9- a radio channel- as a host in 2001. A year later, she participated in a famous British TV series, Celebrity Big Brother.

In 2011, Vanessa took over BBC Radio 2 Early breakfast show as a host\presenter.

However, what's known is that after her divorce from her first husband, Michael Kurer, she reportedly lost a fortune of about $1.5 million on divorce settlements only.

The BBC presenter got married to Michael Kurer, a surgeon, in 1983. The couple had two daughters together, Allegra Feltz and Saskia Feltz.

You May Like: Serena Altschul In Family Bliss! Married Or Just Dating Perfection?

Unfortunately, the marriage did not last long and they got divorced in 2000. According to reports, the marriage cost her a staggering $1.5 million in settlements.

Who is Vanessa Feltz Engaged To? Partner Revealed!

In December 2006, Feltz got engaged to her longtime boyfriend, Anglo-Nigerian singer Ben Ofoedu. Vanessa's Boyfriend: Vanessa appearing on the red carpet at a fashion show in London with boyfriend Ben (Photo: Pinterest)

In an interview given to MTV in October 2013, she has confessed her love for Ben but also said she fears hunky Ben- who is 10 years her junior.

In a recent episode of This Morning (of 16th November 2018), Vanessa lined up with hosts, Ruth Langford and Eamonn Homes, and Real Housewives of Chesire star Dawn Ward to discuss hairy men. While the rest of the panel was light on the discussion, Vanessa took it a tad too far and started revealing about his boyfriend's hair--and not the hair on his head.

He looks like a bloke is meant to look like. He’s got the tufty armpits and the odd hairs on his legs.

But she wasn't to be satisfied with this; and started to talk about his pubic hair, albeit not in so many words (thank God!).

But I wouldn’t like to just see the whole lunchbox without some kind of foliage around it.

Vanessa might have gone a tad too far, but she had the grace to cloak the directness with fancy euphemisms, thus making the show a lot more humorous than sleazy. Ben must have laughed out loud to the 'lunchbox' euphemism as well.

Vanessa Feltz and her partner Ben Ofoedu are rumored to have been married in a secret wedding in 2018. But those were just rumors as the couple is in a live-in relationship after being engaged for 12 long years.

It's likely that Vanessa will take time in getting married as she formally had expressed her fear of walking down the aisle again after her first husband had affairs with younger women and finally left her heartbroken.