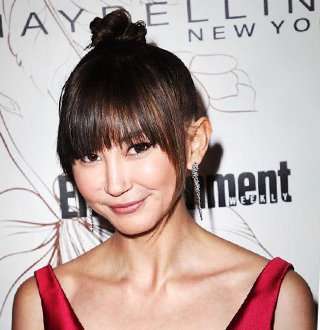 American actress Kimiko Glenn once wandered through the radars of gay speculations, but she succeeded in clearing out the rumors with her blissful dating relationship.

The Phoenix native is mostly known for portraying the role of Brook Soso in the Netflix's series Orange Is the New Black. She appeared as Harlow in the web series Liza on Demand, which premiered on 27 June 2018.

28-year-old Kimiko was interested in acting and performing from a very young age.

Kimiko was born on 27 June 1989 to parents Mark and Sumiko. As for her family life, she has a sister named Amanda.

She enrolled in Valley Youth Theatre at the age of 10 and initiated her theatre career.

During Kimiko's freshman year at the Boston Conservatory, Kimiko was cast in the first Tour of Spring Awakening. She wandered with the group for two years and finally settled in New York and pursued her acting career via theatre projects.

You May Like: Asia Kate Dillon Reveals Partner In Gender Talk! Who Is She Dating After All?

Kimiko first debuted in the Television realm in 2010 with a small role as Katie Summers in television series, Submissions Only. Later she landed in series such as High Maintenance, We Bare Bears, Married, Broad City, Seriously Distracted, and Law & Order: Special Victims Unit.

She also featured in movies like Construction, Nous York, HairBrained, and Nerve. In 2017, she landed as the new cast Brook Soso in Netflix's Orange Is the New Black, and amassed tremendous attention.

Kimiko will be starring as Lallie in the movie, In Reality, and as Harlow in the web series Liza on Demand for 2018.

The 28-year-old actress will voice the character Peni Parker, the adopted niece of Ben and May Parker in Spider-Man: Into the Spiderverse -- a painting-esque of animation from Sony Pictures Animation project which will see Peter Parkers from a multitude of alternate universes come to life.

Picturesque: A still look of Spider-Man: Into the Spiderverse which will drop in Dec 2018 (Photo: IMDB)

Besides voicing Peni Parker, She is likely to voice pilot of the SP/dr armor who shares a psionic link with her suit and radioactive spider co-pilot. Her character will hail from a technologically advanced world.

Nicolas Cage and John Mulaney will also lend their voices in the movie. Spider-Man: Into the Spider-Verse is slated to drop on 14 December 2018.

Gushing about her love-life, Kimiko was once rumored to be gay.

Her role as a love interest of the character Poussey in the series Orange Is the New Black gay fueled the rumors of her being bisexual. But, the rumors were neatly swiped by her relationship with actor boyfriend.

Kimiko has been in a relationship with 25-year-old actor Sean Grandillo since 2015. Though it is not sure how the couple met, they are super cool while sharing the together spent moments on their social media accounts, and showcasing their affection.

Kimiko and partner Sean attends various events and celebrates special days with one another like a family. They even spent their first month of 2018 via a trip to Japan. The pair visited various famous places such as Kamakura-gū, Ofunato, Merihari, Kyoyo and updated their Instagram with the pictures they clicked together.

One of the pictures even captured the lovebirds in front of the beautiful Mt.Fuzi. Kimiko captioned the photo as,

Well, with the perfect initiation of the new year, the couple celebrated their Valentine with all their heartfelt love. However, the pair were not together on 14 February 2018. So, Kimiko Instagrammed a picture of her boyfriend and dedicated a message to him.

In the caption, she quoted Sean as her "whole heart & soul" and wrote that they would one day celebrate the day together. Moreover, she also revealed that 2018's Valentine was their third anniversary and quoted, " I love you so much, happy valentines day."

Despite the budding career and hectic schedule, it is clear that the pair's relationship is going all strong. Their random social posts related to each other is proof that their relationship is fortifying with each passing day.