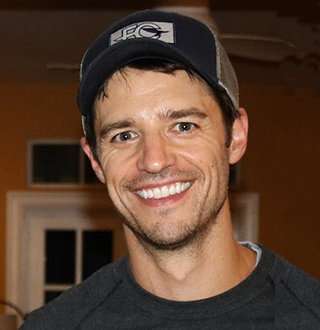 American actor Joshua Snyder had been in a relationship for a long time but married his girlfriend only at the age of 39. Both the partners have kids from their first marriage.

Joshua Snyder is known for his role in the movie Shopgirl (2005) and his appearance in television shows like CSI: NY and Criminal Minds: Beyond Borders and Without a Trace. He is a known name in Hollywood for his innocent look and commendable acting.

Here are a few wiki facts about Joshua regarding his bio, net worth, kids and married life:

Joshua Tyler was born on 11 November 1977 in the United States of America. He spent up his early years in Colorado.

You May Like: Media Veteran Ron Claiborne, Married Man With Wife? Family Besides ABC

His mother Lynne Snyder raised him along with his two sisters Josi and Jori.

He has also made appearances in many television series like Without a Trace and Criminal Minds.

Joshua, who is also a stage actor, starred in 2019 comedy Hard Breakers alongside Chris Kattan and now runs an online baking show with his wife, Angela Kinsey.

With all his endeavors, he is estimated to have amassed a good net worth.

Joshua married actress Angela Kinsey in 2016. Angela is famous for her portrayal of character Angela in the television sitcom The Office as a religious accountant on the show which also starred Steve Carell.

The couple married on a sunny Sunday afternoon in Topanga, California on November 13. Just Married: Joshua Snyder walks with wife Angela Kinsey in a wedding walk, and both give a candid wedding pose. (Photo: eonline.com)

Angela, who was previously married to Warren Lieberstein, has one daughter named Isabela with him. Joshua also has two kids, both sons Cade and Jack with his first wife, whose whereabouts are not known.

4. Joshua’s New Baking Channel in YouTube Is A Hit

Joshua has taken a pause from doing movies for some time but has invested his time in something he likes and enjoys. He has been baking on his YouTube baking channel.

The actor-turned-baker is a hot talk in the town as he runs the show with his beautiful wife, Angela Kinsey.

The couple invites celebrity guests and their friends in their show and shares the ingredients and baking methods of some of their favorite recipes in a friendly way.

Both Josh and Angela have a long way to go for the new job, but they are doing incredibly good.