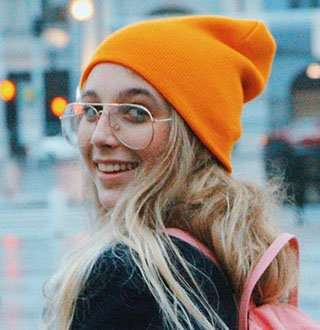 17 years old Youtuber Emma Chamberlain was identified as a prime suspect in a theft case - she allegedly stole the heart of a hunky man.

The California native got impressive popularity in July 2017, on account of the video, "we all owe the dollar store an apology," which has been viewed over 3.2 million times (as of 2018).

We Din't Mean It: Emma Chamberlain's first viral video where she asks for apology from a dollar store(Published on Jul 27, 2017)

Here are some wiki facts about Emma Chamberlain including her burgeoning career in Youtube at age 17, which has led to a hugenet worth and a possible boyfriend.

The biology loving student of Norte Dame High School, San Carlos, California, felt that she didn't fit in the environment and gave Youtube a shout out after she dropped out in 2016.

The vlogger created her self-titled channel in June of 2016, but didn't post her first video, City inspired Summer Lookbook, until June 2017. Strange?

The YouTuber has been actively posting varied contents (vlogs, DIY videos, Hauls, lifestyle videos) three times a week and guess what! She has impressively gained 5.5 million plus (2018) subscribers in her two years of Youtube journey.

A few years from now and the news might be ‘Emma Chamberlain’s channel hits 10 million subscribers!”

2. What Is Emma Chamberlain's Net Worth? Merch?

The web star has estimated net worth of $1.7 million from youtube alone.

With growing popularity and followers, Emma launched her own merch, glorifying her income further. Reportedly, top talent agency, UTA signed the youtube phenomenon and together, they launched her first-ever clothing line titled Low Key By Emma C Or High Key By Emma. The merch line was inspired by her ‘alter ego’, as said by Emma.

Since the launching of the merch line, fans, have criticized her for blurring the pictures of products and overpricing, however, her products have been sold out.

17 years old Emma was born on May 22, 2001, and raised in California, the United States. She resided in the place till date.

The blonde’s oil painter of a father, Michael Chamberlain has his own Youtube channel(133k+ subscribers). She adores her artist father and mentions him on her social media (recently gave him a Birthday surprise in July 2018)

However, she has remained mum when it comes to disclosing her mother. This might as well be the reason for her unveiled ethnicity. Had she wanted, she would have kept her American nationality a mystery as well!

The blue-eyed Youtube star is 5 ft. 4 inches tall and loves working out so as to maintain her body weight averagely 50 kg.

The two internet personalities’ followers/viewers have always had their insights on Chamberlain-Dolan collaborative videos. No matter for how many times they name their relation a platonic friendship, the clamor doesn't seem to cease ascertaining Ethan as Emma’s boyfriend.

Ethan, who runs a multi-million hit youtube channel with his twin brother Grayson Dolan,  has collaborated with Emma on videos, and as speculated by the followers, they are spotted unnaturally together -  ‘more than usual’ Happy 4th huh! Who knows they might be seeing each other for four years now!.