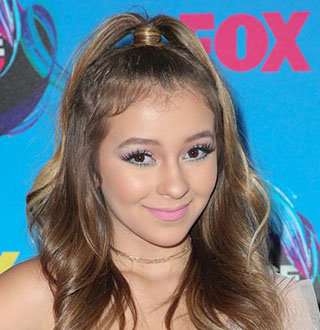 Instagram star, Danielle Cohn having gone through some stacking piles of hateful and harsh comments on her whole being, didn't let herself down as she had the support of her loving companion.

Danielle Cohn is a well known Musical.ly star and singer who released her first single, Marilyn Monroe in 2017. The song’s music video has gained over 9 million views to date.

Age Of Online Fame: Danielle Cohn giving details to her daily night time routine in the video on her self-proclaimed YouTube channel as requested by her fans (Published on 4 September 2018)

Born in 2004, Danielle Cohn blows her birthday candles every 7 March. She was raised in Florida, USA along with her older brother and belongs to the American nationality.

As for her parents, there isn’t much information on her father, but her mother is her manager as she’s scared to let her daughter travel alone and mix with other prominent social stars.

Danielle shares a North American ethnicity and stands at the height of 4 feet 8 inches (1.47 meters). The Instagram star began her career as an aspiring model by participating in beauty pageants and eventually won the title of Miss Florida Jr. Preteen Queen in 2015.

After her ultimate success in the platform of modeling at a young age, many agencies called her to do some advertisements which led to gaining more attention.

The 14-year-old media star began to grasp more fans on her Musical.ly account, and it had only been some months when 2.4 million fans had landed.

As Danielle created her YouTube account named, Dani Cohn, she didn’t waste much time to lean on her music career as she released her debut song, Marilyn Monroe in May 2017 which became an instant hit gaining millions of views.

It wasn’t long before Danielle released two more songs, Hate on the summer in August 2017 that has gathered over 1.6 million views and Fix Your Heart in December 2017 massing more than 5.5 million views.

Her latest single, Little Like Paradise was released in March 2018, and it has already gained almost 2 million views. The music video was directed by Joe Bland from the Bland Productions.Danielle’s music videos have featured internet stars including, Lauren Godwin, Bryce Xavier, Sebastian Topete, Tayler Holder, Kevin Bojorquez, and Sebastian Bails.

As an internet sensation, Danielle earns a considerable amount of fortune from her career as a singer and model.

Though her net worth isn’t revealed in detail, Danielle’s mother mentioned the fact that her daughter earned more than her in a week.

According to sources, a sponsored video through Musical.ly offered $400 to $500, and Danielle receives multiple requests in a week. The money Danielle earned was more than enough to pay for college.

Danielle’s earnings allocate 20% to bills and rents, more 20% to a separate bank account and the remaining for her personal spendings.

It was on 11 June that Danielle started dating model and internet sensation, Mikey Tua. And it hasn’t been that long, but the two are already absolutely adorable together, putting aside the usual hate comments they get on a regular basis.

Danielle doesn’t step back a bit when it comes to showing off her boyfriend on her Instagram. She frequently posts pictures of the pair as they experience their adventures.

Boyfriend Goals?: Danielle posts a picture with her boyfriend as both stand hand in hand in front of the Hawaii ocean on Instagram on 11 September 2018 (Photo: Danielle Cohn’s Instagram)

Before Mikey, Danielle had been dating another Musical.ly star and childhood friend, Sebastian Topete but that didn’t last very long. They’re on quite good terms and are still friends.

The fact that Danielle switched to another guy a bit soon was also one of the reasons many people started putting out there disregard and hate for calling her some inappropriate names.

But that doesn’t seem to affect the pair’s relationship as they go through the hate of some overly jealous people together. Because even though some relationships get torn apart due to online bullying, few stand strong and strengthen more and Danielle seems to be having the latter with her boyfriend.