Harrison Butker Married His Wife after Dating for 7 Years

On February 10, 2018, Harrison Butker married his wife Isabelle Butker during a private ceremony.

The Kansas City Chiefs star player posted a series of pictures depicting the highlights of his wedding day.

In his caption, the athlete promised to continually pray for "strength and perseverance" to sacrifice for his wife.

Later in 2019, the couple was blessed with a baby boy. According to a report by USA Today, Butker and Isabelle named their son James Augustine Butker.

Per the report, the baby's birth including his details was made public by Butker on his official Twitter. 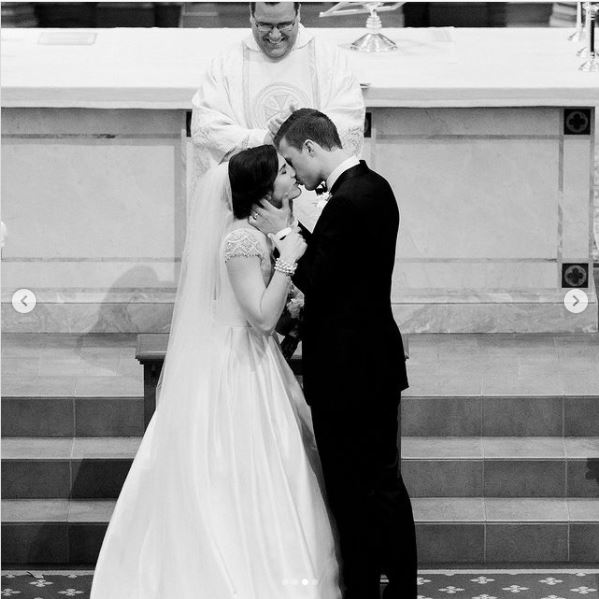 Prior to the couple's wedding in a devout Christian ceremony, they dated each other for seven years before exchanging their vows.

Reportedly, Butker proposed Isabelle on May 9, 2017.

A few days later, he took to his Instagram to share a series of images showcasing the moment Isabelle said yes to him.

The photos showed the couple in the middle of a football field, with Butker holding an engagement ring in his hand.

The couple are teenage sweethearts who first met at the Westminister in Georgia during their high school years.

Butker's then-girlfriend followed him at the Georgia Institute of Technology after he joined the Carolina Panthers' practice team.

Isabelle did not stop there. She followed him when he signed for Kansas City Chiefs.

And by the time he signed a mammoth 5-year-$20.3 Million contract extension with the Chiefs, Isabelle had already become the mother of their son.

Who Is Harrison Butker's Wife Isabelle?

Isabelle is a Georgia native and was born in the year 1944 in Mableton, Georgia.

She is a Spanish and Computer science major from Rhodes College in Memphis.

She is also known for working as a maths tutor for school kids and volunteering at a pet shelter during her high school years.

Unlike her husband, the wife of the football star isn't adequately active on social media.

However, she frequently features in Butker's many Instagram posts.

Harrison Butker Had Support from His Parents

Per a report by Heavy, Butker, the Kansas star, had publicly spoken of his parents' support and their contribution to his career.

Butker told the Kansas City Star that he was never forced by his mom and dad into playing football.

He said his parents did not push him to do anything he did not prefer to do.

According to Butker, he loved sports growing up, which drove him to make a career in American football.

Butker also revealed how his dad followed his game and gave him notes on his performance.

"He's always making comments about stuff, but it's good," noted the Kansas star.

Support from his parents had always helped him remain grounded despite being a known athlete.