American television host and author Ted Allen belongs to the gay community. He regards 26 June 2013 as a historic day in his life as Ted announced to step-up his relationship with his "partner for 20 years".

The Columbus native is known as a host of an American cooking reality show, Chopped from its very first episode. He is the former food and wine connoisseur on the reality series, Queer Eye, aired on Bravo television network. Ted is a long-serving columnist for American men's magazine, Esquire and also an author of two cookbooks. 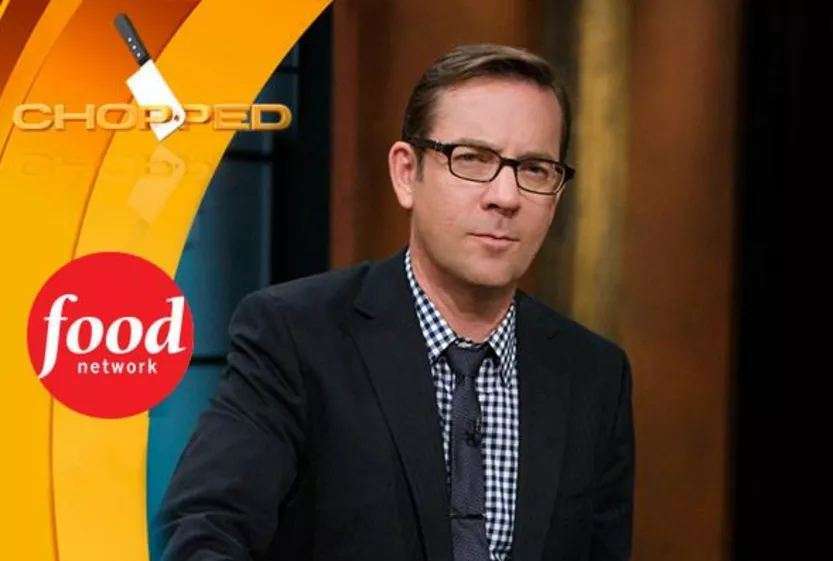 Chopped: Ted is a host of Food Network's show, Chopped since 2009 (Photo: Thedailymeal.com)

Ted Allen won an Emmy Award along with the other cast members in 2004 for ‘Queer Eye.’ Moreover, he also received the Visibility Award from the Human Rights Campaign in San Francisco in 2011.

Ted, who stands at the height of 1.8 meters (5 feet 11 inches) was born in Columbus, Ohio on 20 May 1965 to parents; Lowell Reese and Donna Allen. Due to his matching surname with American comedian, Tim Allen, his fans presume that they are brothers.

Ted got graduated in psychology from the Purdue University in 1987. Ted later earned his Master's degree in journalism from the New York University.

From A Freelancer To Hosting A Food Related Series, Sociable Ted Allen's Net Worth In Millions!

Ted started his career as a freelancer for Chicago magazine, where he wrote about food, wine, and luminaries of the culinary world. He then moved to Esquire to work as a contributing editor in 1997.

Later, he joined the cast of the series Queer Eye for the Straight Guy. Since then, he has appeared in a lot of television series especially food related.

Other movies and television series that Allen has made an appearance in are Chopped: Better Luck Next Time, Chopped After Hours, Beat Bobby Flay, The Best Thing I Ever Ate, Chopped, Worst Cooks in America, Chelsea Lately Food Detectives, and Dear Food Network: Thanksgiving among others.

Ted's career made a remarkable turn as he appeared as a regular judge on the third and fourth season of reality competition series, Top Chef in 2007.

Allen is also a successful author. He wrote two popular books, Queer Eye for the Straight Guy X18 Dubin, and In My Kitchen: 100 Recipes and Discoveries for Passionate Cooks. Similarly, he co-authored numerous books related to food and lifestyles.

He has an estimated net worth of around $ 5 million at present which he earned as a journalist, actor, and writer,

As in 2018, Ted is participating in DOFL for the eleventh time in her career, an international event that has raised over $4 million locally over the past 24 years to economically serve people living with HIV/AIDS. Talking to #Boom, he urged people to participate in the event

"And let's not forget that an important point about Dining Out for Life is that all of the money that is raised in your town stays in your town and goes to your local HIV/AIDS service organizations. So you're helping yourself, you're helping your neighbor, and it's laughingly easy. So why not? Why not join the cause, man? Help out! "

No wonder why he has a huge fanbase as he keeps giving back to the community.

Apart from professional life, when it comes to his personal life, Ted is currently married to his partner, who are living together since 1993.

Ted got engaged with his long-time partner, Barry Rice in June 2013. Marking the historic day of approving the gay marriage by the Supreme Court of the United States, Ted made the proud announcement of his engagement with Barry via a tweet on 26 June 2013. He stated that the couple is planning to get married in his post.

After four days of the announcement, Ted tied the knot with Barry on 30 June 2013. Barry is an interior designer by his profession, who creates modern interiors based on the custom-made furnishings.

The couple enjoys their blissful love life as husband and wife and often seen together attending various events. Back in February 2014, the couple attended the BAM Theater Gala in New York City.

Gay Couple: Ted and his husband attend the BAM Theater gala at Skylight One Hanson in New York City in February 2014 (Photo: Zimbio.com)

Moreover, Ted shares his endearing moments with Barry on his social sites. In April 2016, he uploaded Barry's favorite shot of them in Tidal Basin, Washington on his Instagram.