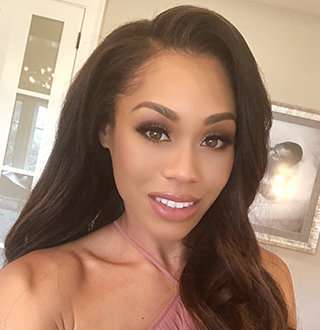 RHOP's star Monique Samuels is pregnant at the age of 34 with her third children after a miscarriage.

The reality star Monique, who came to stardom after appearing on the Bravo reality series The Real Housewives of Potomac, and her husband, former Washington Redskins player Chris Samuels, are expecting their third child together.

Monique, who is already a mom of two children, announced that she is pregnant on 18  June 2018 via an Instagram boomerang. This happy news derives nearly two months after she suffered a miscarriage in March. Monique made an emotional confession last month on RHOP, revealing that she had a miscarriage a little month ago.

During an episode of  the Bravo show she said;

As soon as I took the pregnancy test, Chris is just grinning from ear to ear, and it never once dawned on me that we would lose it. Until you've experienced loss it's hard to even put it into words.

Monique has been married to Chris, 40, since 2012. They had an elegant contemporary wedding in Washington, DC on March 3. The pair first met through a mutual friend when Monique first moved to the nation’s capital. They were friends for a long time before they started dating.

They share two children; a son Christopher, 5, and a daughter Milani, 2. The Pleasantville native is a boss in every sense of the word. She manages businesses which includes a real estate investment company, a business enterprise, and the Chris Samuels Foundation, that she leads with her husband.

In addition to that, she has also proven that she isn’t afraid to speak her mind. As an entrepreneur, wife, mom, and philanthropist, Monique is out to prove women can have it all.

She launched her website, Not for Lazy Moms, where hardworking moms share parenting tips and all-natural at home remedies. Monique’s desire to make a difference and help others is fueled by the love and support of her family.