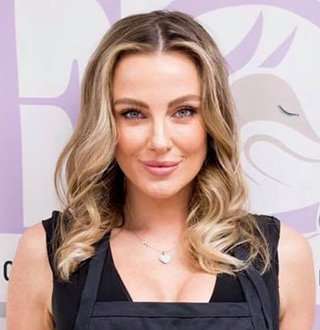 Amber Nichole Miller is known for her modeling work she did for MGM Mirage Resorts. She also appeared on the covers of Oxygen, DXL, and MMA Authority magazines and was featured in spreads in Maxim, GQ, and Muscle & Fitness. At the age of five, she appeared on a Disney Channel spot as well. Moreover, she has appeared in several commercials, and has hosted television modeling competitions and played featured extra roles in numerous films.

Amber Nichole Miller was born December 10, 1977, in Colorado. She was raised in Colorado where she completed her high school. Later on, after finishing high school, she relocated to Las Vegas, Nevada.

Does Amber Nichole Miller Have A Husband?

It is obvious that many people are interested in a beautiful and talented woman like Amber's personal life.

So let us end your curiosity and let you guys know that she is in a relationship with MMA fighter named Tito Ortiz who is a former UFC Light Heavyweight Champion as well.

Back in 2014, Amber and Tito started dating each other right after her partner got divorced from his first wife named Jenna Jameson, an adult film actress. And since then till today’s date, Amber and Tito are still together.

Interesting: Who Is Nancy Cordes Married To? Husband Unveiled Of The Gorgeous Journalist! With Husband And Kids: Amber Nichole Miller posing along with her husband Tito and her three sons. (Picture: Amber's Instagram)

Moreover, in 2018, the couple celebrated their five years of togetherness and posted a picture of themselves on Instagram. As in now, the couple lives together under the same roof with Tito’s three sons from his first wife.

Meanwhile, Tito’s ex-wife, Jenna Jameson was not happy with her ex-husband’s new partner. She tried to bring Amber down in public by posting a Tweet, accusing her of using her stolen property.

But, Amber, with a cool head, decided to clap back at Jenna and Tweeted that she was just jealous of her and she was making false accusations.

Let’s Find Out The Net Worth Of Amber Nichole Miller

When it comes to Amber’s career, she has worked on many TV shows such as WAGS, Party Crasher (2017), WAG Wedding Bella (2018), to name some. Adding on to that, she also has her online closet store where she sells different women wears, shoes, makeup, bags, and accessories.

After seeing all of her works, we can assume that she enjoys a hefty amount as her net worth. However, her exact net worth is still under the rocks for the public. Meanwhile, talking about her boyfriend Tito’s net worth, it is estimated to be around  $15 million.