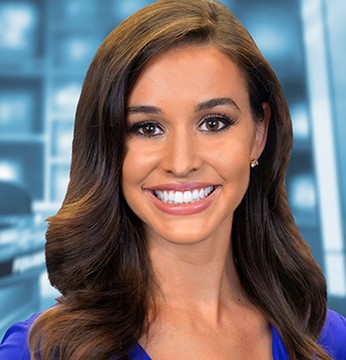 Someone who always enjoyed talking and gets paid for it as well- Hannah Battah is an American journalist who currently serves as a news reporter & anchor for Texas-based Fox 4 channel KDFW. She anchors for Fox 4’s Good Day newscasts during the early weekdays and for Fox 4’s Good Day on the weekends.

Previously she anchored and reported for KBAX/KBFX and KOMU-TV. She was also the political reporter and editor for Missouri Digital News.

She is also the recipient of the Heart of America Gold Award from the Kansas City Press Club for her reporting on the deadly 2011 Joplin Tornado.

Hanna Battah was born on 6 May 1993 and grew up in Minnesota in a family of six; with parents - father (he was a political science professor at Minnesota State University), mother (Debra) and sisters Nadia, Anisa & Leena.

The gorgeous Hanna with a height of 5’8 inches, since a young age was amused to learn about current events and politics. And this interest of hers led her to attended the University of Missouri where she graduated with a degree in broadcast journalism and political science in 2015.

During her college days, she worked for MUTV (campus tv station) covering sports-related topics. She worked as a news department intern for WCCO-TV in 2013 for a year. From 2013-2014 she served as a political reporter and editor for Missouri Digital News. Then in 2015 she also got a chance to work as a news department fellow for KPHO.

Along with college, she also juggled a professional job as well. She embarked into the news industry as a multimedia journalist and anchor for NBC affiliate station KOMU-TV from 2012-2015. After assembling experiences from her productive college year and involvement in various platforms, she started her career as a fresh graduate at KBAK CBS 29 and KBFX Fox58 in 2015. She co-anchored for the afternoon newscasts and reported for the evening newscasts for the station.

After serving the station for two years, she joined KDFW-TV Fox 4 in May of 2018 and is currently serving as the weekend morning anchor and reporter. As a news anchor at the Fox 4 station in Dallas, she earns an average estimated salary of $93,889.

As clear as her professional history is, her dating history is the polar opposite of it as it is unknown whether she is single or dating anyone at the moment.

But although her romantic involvements aren’t specified clearly, she has shared some of the things she seeks in a relationship. This might come in handy for her future husband with whom she will get married to!

In a tweet in 2012, she stated that “nothing is more precious than falling asleep on the phone with your boyfriend to hear him rolling around through the phone.”

And in April of the same year, she jokingly tweeted that she is married to Ashton Kutcher. Can anyone beat Ashton Kutcher? If you can, you may have a chance at dating Hanna!

A more clear view of her relationship status was shed upon when she mentioned in a tweet of 2013 that she is single. But it was five years ago, and things change.

So we’re unaware about her relationship status currently until she decides to give us some insights into it.