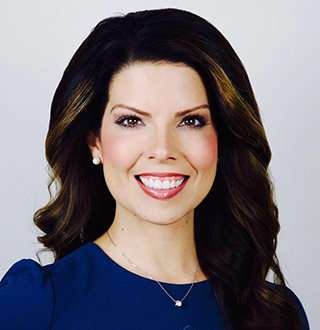 The epitome of beauty with a brain; a professional weather enthusiast, operatic singer, and Miss Vermont 2012 -- Chelsea Ingram is an American meteorologist.

She is most popularly recognized as the meteorologist for the CBS station. Currently, she serves as a meteorologist for Philadelphia based CBS 3’s Eyewitness News. Previously she covered weather forecasts for WJZ-TV based in Maryland and WFFF/WVNY based in Vermont.

The Raleigh, North Carolina native, was born on 10 October 1988. She received her higher education at her hometown and is a graduate of North Carolina State University. She graduated with a Bachelor of Science degree in Meteorology.

Later she attended graduate school at Lyndon State College in Vermont with coursework in Broadcasting. And as of now, she is pursuing a master’s degree in environmental science and policy at John Hopkins University.

Then she joined Lyndon State College as a post-graduate student. Just at the end of the first semester, the gorgeous reporter was offered a job. She began her broadcasting career as a meteorologist at WFFF/WVNY in Burlington, Vermont. While working at Vermont, she represented the state in Miss America Pageant 2013.

Soon in 2013, she moved from Vermont to Maryland to join her new job at the CBS family as a meteorologist for WJZ-TV. But after serving three years at the station, she suddenly left her job for some undisclosed reason. Who Is Chelsea Ingram’s Husband?

When it comes to the gorgeous reporter’s love life, she is happily married to her best friend and love of her life, husband Micheal Cammarata.

The couple got engaged in 2014 and tied the knot of love in a wedding ceremony at North Carolina on 10 April 2016. Chelsea was dressed in a beautiful and elegant white wedding gown while her husband was dressed in a traditional black suit. She lives happily with her little family which consists of her husband and a cute dog named Doppler at their home in Wilmington, Delaware. And since the marriage, looks like the bond between the pair has grown stronger than ever.

In January of 2019, when Chelsea got sick, her husband got up at 2 A.M to take care of her. She described this endearing moment of hers in a tweet. It is the small moments and deeds like these which reflects the purity of love that one has for the other.

And Chelsea seems quite happy and lucky to have a caring husband like Michael for herself!