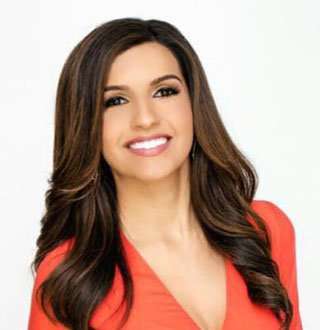 For over ten years Amanda Salas has been showering the world with her witty and creative reporting. A television host, who first gained attention from being a correspondent on Hollywood Today Live, Amanda has slowly and gradually made her way to the top.

The New York native has been nicknamed The Latina on a Scene-a. And there’s a good reason behind the name. Not only does she report, but she has sit-down interviews, does set visits, covers awards shows, and also hosts the Good Day: LA. Wherever there is an exciting story, Amanda is there. Thus the nickname.

Amanda Salas was born on 6th June 1985 in New York, the USA which means she holds American nationality. However, information about her parents, height, sibling (brother), and high school has not yet been disclosed. But her love for her parents and brother is evident on her social media. And talking about her education, it is only known that after her graduation, she got her first job which then began an illustrious career.

Amanda has been doing her part as an entertainment reporter, a presenter, and a host for over ten years. Her outgoing on-screen personality has gained her popularity among the audiences.

She has used her creativeness and her witty personality to reach where she is today.

Amanda first began her career in reporting after her graduation. In 2008, she started a job at the Orange County Register where she would end up working for their new show The Juice. It is from here she began interviewing A-list celebrities, Professional athletes and Reality TV personalities. From then onwards, it was a steady ladder to success.

In April of 2017, she joined Fox 11 where she has been working since. Not only does she report about news, but she also covers Automotive reviews and Auto shows around the country. Clearly, she has her fingers dipped in many places.

When it comes to salary, Amanda pockets a decent amount in wage. The exact figures as to how much Amanda earns have not been disclosed, but as per the reports of payscale, an average news anchor makes a salary of $82,500. Taking into consideration Amanda’s experience and her reputation, we fell she brings home a nice chunk of change.

When it comes to her personal life, Amanda has never been the open type of person. She has kept most aspects of her personal life away from the limelight. As for her love life, she has never spoken out about it but has been seen posting a couple of tweet hinting on the possibility that she could indeed be in a relationship. However, it was a couple of years back in 2012.

As of now, whether or not Amanda is in a relationship or if she is married can only be answered her Salas herself.

It seems she just has not found herself the perfect husband and is taking her full time before rushing into anything. Any further information regarding this aspect of her life can be revealed by Amanda herself.