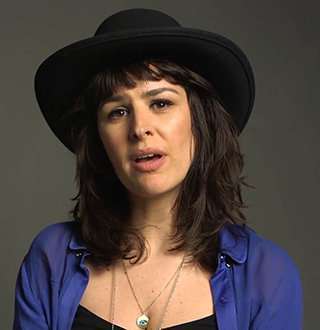 Radio X’s Liliana Bird and her long-time boyfriend Noel Fielding welcomed their first baby together. Surprisingly, they had named their baby after one of the most renowned 20th-century artists.

Liliana Bird aka Birdy is a British radio presenter notably known for her work on stations like XFMLondon, Capital Radio, and Virgin Radio. As of 2018, she presents the Sunday evening show on Radio X.  Liliana is the creator of theatre production company Bird & Be as well. Lliana Bird and Emma Gannon launch season 2 of audio podcast Get It Off Your Breasts on 5th March 2018 with a fantastic guest Stella Creasy (Photo: Lliana Bird’s Twitter)

She is not just a radio personality but also an actress, writer, and social worker.

Lliana Bird, who was born on 17 August 1981 in London, graduated with a degree in Experimental Psychology from Bristol University.

She has appeared in many radio stations, Television shows and on Theatre and TV as an actress as well.

In her radio career, she has contributed to stations including Capital Radio, Virgin Radio, and BBC Three Counties. She presented on XFM from 2007 until 2015. She is also a regular guest on LBC, BBC 5 Live and BBC London.

She has appeared on Television shows like Sky News and BBC Breakfast as a guest commentator. Lliana also worked as an actress in numerous productions, including Fiddler on the Roof, Boom-bang-a-bang, and The Christmas Cock-up.

In 2016, Lliana released a book The Mice Who Sing for Sex with Dr. Jack. Lliana is also the co-founder of Help Refugees which provides aid to refugees across Europe and beyond.

As of her love life, Lliana Bird has been dating actor/comedian Noel Fielding for eight years now.

Her boyfriend, Noel is a renowned British entertainer, who is best recognized as being the other half of comedic duo The Mighty Boosh alongside comedian Julian Barratt.

Noel began his career doing stand-ups in the 90's but slowly transitioned to TV at the turn of the century. He has also starred in a plethora of movies including Sweet(2001), Come On Eileen(2010) and Set The Thames On Fire(2015).

Besides acting and stand-up comedies, the 45-year-old London native has made appearances on more than 10 music videos.

Likewise, in his mid-30's he delved into the art world. His 2008 art exhibition Psychedelic Dreams of the Jelly Fox was largely influenced by the Spanish surrealist Salvador Dali.

It is still unclear how he met Liliana but the duo has been inseparable since 2010.

Is Lliana Bird Engaged To Be Married?

Although the couple has been together for eight years, they always tend to keep their private life away from the limelight. Little is known about their relationship, and it is still unclear whether they are married or not.

However, it is known that Birdy and Noel, who is not engaged, have been living together at a house in Highgate, North London since 2010. They have stayed tight-lipped about on Birdy’s pregnancy, but now it is all out as the pair welcomed their first child together.

The 36-year-old Lliana and her partner Noel, 45, welcomed their first child together on April 2018. Birdy reportedly went into labor, and things have been quiet since then.

However, on 7 April 2018, the pair stepped out together with their newborn for the first time. Their baby was seen swaddled in blankets as they strolled side by side in London. Baby Fever:- Lliana Bird and her boyfriend Noel stepping out in London together with their baby ‘Dali’ on 7th April 2018 (Photo: dailymail.co.uk)

The pair decided to name their newborn baby Dali after one of the most celebrated 20th-century artists, Salvador Dali. Salvador has been the real inspiration in Noel’s career, so it’s no surprise that he’s named a baby after him.

The couple has not yet revealed the gender of their baby officially, but reports are saying that baby Dali is a girl.

They didn’t even officially announce the news of Lliana’s pregnancy until Lliana was eight months pregnant, only confirming it in early March 2018 through an Instagram post.