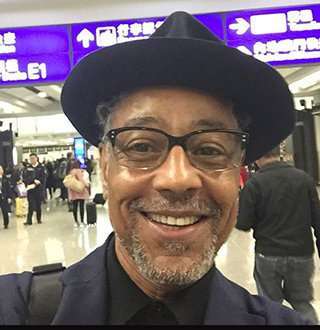 Once upon a time, Giancarlo Esposito was seen enjoying with his beautiful wife, who shared four kids with him. She was the better half of him, making appearances in red carpets and red tape events with him.

The Danish-born American actor is famous for his portrayal of Gus, on the AMC's shows, Breaking Bad and Better Call Saul. His performance made the character Gus as one of the best villains of all time on television series.

Being multilingual, it’s amusing how he gained most fame from a character whose source of energy comes from silence. While the all popular meth show, Breaking Bad ended a few years back, its spin-off, Better Call Saul,  is onto its fourth season in the late quarter of 2018; he will be reviving his infamous role as Gus.

Esposito quit acting after two years to pursue a religious path but deep inside he knew he always wanted to end up becoming an actor rather than a priest. During that time, he was attending Mt. St. Joseph Military Academy.

When he returned from there, he rejoined the stage. When he was 17, he decided to branch out and auditioned for casting director Shirley Rich, who was choosing the military drama Taps. It was Shirley who sat her down and gave him the advice to learn how to act for the camera.

Performing on stage and for the camera are two different things. He enrolled and graduated Elizabeth Seton College in New York, with an associate degree in radio and television communication.

When he joined the cast of Charles Fuller's 1980 play, Zooman & the Sign, playing a teenage thug who murders a girl, his hone for acting sharpened.

Fast forward to the present time, he has established himself as one of the best actors in the television world.

Born on 26 April 1958, Esposito was born in Copenhagen, Denmark. His parents were of varying ethnicities, his father was an Italian while his mother was an African-American. However, he grew up in Manhattan after moving there when he was six.

Esposito’s mother was an Opera & nightclub singer. While performing in a tour in Naples, Italy, she met Esposito’s father, a stage carpenter. Performing was infused in his blood before he was ever born. As a child, he shared an intimate bond with her mother as the pair recited poetry together -his favorite was Edgar Allan Poe’s The Raven.

But his parents separated and afterward, there was never enough money. So he took it upon himself along with his brother to help their mother and pay the rent of the family home. It didn’t look so hard; the brother agreed with each other.

Their mother introduced him and his brother to an agent for young actors, and a few days later, the agent called telling them to go for an audition at Broadway’s Winter Garden Theatre. His brother, a year older, was sent to the other side of the stage.

He scratched his head after forgetting to prepare for a song, which is why he decided to sing ‘Happy Birthday”. He failed the first time. His agent pushed him forward asking him to sing more loudly. He did so and was sent to the other side of the stage.

It turned out that the children on the other side were only selected. That’s how he got chosen for Maggie Flynn.

Parents Four Kids Alone: Where is His Wife?

He is always accompanied by his daughters whether that be spending time together at a concert or watching him act. However, their mother and his wife, Joy Mcmanigal, who used to be a part of the family has completely vanished. Giancarlo Esposito and his wife Joy Mcmanigal had fun moments on the red carpet in 2013 NBC's Globe Fete. (Photo: PopSugar.com)

His wife used to accompany him in many red carpets, award ceremonies or screenings. But she has disappeared into thin air, and in this matter, Giancarlo's silence hasn't helped.

Just like his character Gus, he prefers to keep quiet about his relationship, but it is a well-known fact that he was married to her. They tied the knot in 1995. According to wiki he and his wife had a divorce after the birth of their kids, leaving him with the custody of them.