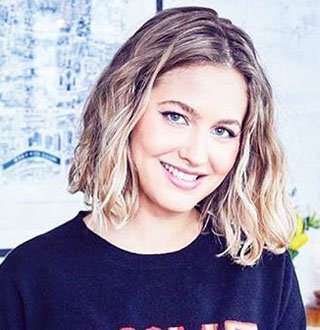 A Le Cordon Bleu trained chef who depicts a passion for anything edible and aims to help people enjoy food with colorful dishes --  Tess Ward is a chef, food blogger, former model, and author. She rose into fame for her cookbook titled The Naked Diet (2015) and a year later released another cookbook named The Naked Cookbook (2016).

Besides running her food blog (tessward.com| The Yes Chef) and working as a chef, she also serves as a creative and food consultant, freelance food and travel writer.

To get to know more about this gorgeous, passionate and chic food enthusiast let’s delve into her wiki-like bio which includes information on her career, personal life, and romantic status:

Tess Matilda Ward was born in 1990 at Oxfordshire, England and celebrates her birthday every year on 25 March. She was born into a family of parents Christopher and Kate (a yoga teacher).

The tall beauty with a height of 5’8 inches and beautiful hair started her modeling career at the age of 19 but never took it as a sole profession entirely. As a model, she has walked for Dolce & Gabbana runway show and is signed to Storm Management.

As a chef, she has worked at River Cottage, The Ritz, and prepared VIP dinners for clients such as Alice Temperley, Michael Kors, Mulberry, and other brands. She also has penned two cooking books and runs a popular food blog.

You may also like: Love Island's Caroline Flack Whirlwind Romance With Boyfriend; Dating To Engaged Journey

She also has a diploma from the Institute of Integrative Nutrition as a certified health coach.

The evolving chef’s fame skyrocketed after she was photographed with her ex-boyfriend Harry Styles’ in his Audi car. Tess and Harry Styles were introduced to each other by mutual friends. And just on the first meet, the pair was smittened by each other and things turned romantic quickly. A source also told that the couple had been on many dates.

The madly in love pair only confirmed their romance publicly in May of 2017 after Tess was seen supporting Harry Styles at an intimate London gig.

However, the couple broke off their relationship in around June of 2017 after Tess realized that she still had feelings for her ex-boyfriend.

Following her break-up with Harry Styles, she reunited with her ex (identity undisclosed), and they’ve been inseparable since then.

After she confirmed her relationship with Harry Styles, the once good reviewed cookbook of Tess started receiving tons of bad reviews. And the catalyst towards her cookbook facing low ratings was the furious Directioners!

The hate comments towards her went to such extreme level that she even had to post a picture on Instagram with the caption asking people to be nice to her. And moreover, she was also accused by the fans of using Harry Styles for fame to which she replied defending herself:

“I’m not the kind of person who’s interested in fame and if you’re put in an environment which you don’t understand and you can’t control and you don’t want, it’s horrible.”