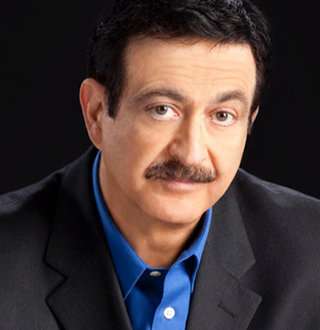 Radio Host George Noory can captivate the audience with his exciting talks on the paranormal but when it comes to talking his married life talks he gets as reticent as he can get. Hence, his wife’s identity remains a paranoia itself.

The American native is a veteran radio show host widely appreciated for his late-night syndicated podcast called Coast to Coast AM. This program includes a variety of topics, most common of which are the topics related to either paranormal or conspiracy theories. And recently, he has started his TV project called Beyond Belief.

The sound biz host has also appeared on History Channel series, Ancient Aliens and has authored books like Worker In The Light: Unlock Your Five Senses And Liberate Your Limitless Potential, Journey to the Light, Talking To The Dead among others.

George was born on 4 June 1950 in Detroit, Michigan to Lebanese Egyptian parents. He grew up in Roman Catholic belief with his younger sister.

The 68 years old was interested in paranormal and ufology as a child, and by the time he turned a teenager, he had joined the UFO organization NICAP.

The host switched from pre-dental program to major in communication at while he was in the University of Detroit. After graduating, he served nine years in the United States Naval Reserve as a lieutenant.

Having tried his hands on quite a variety of fields,’ his interested finally inclined towards radio show and seemingly, he has been in love with the buzz gig.

What Is George Noory’s Net Worth From Radio Show Career?

The expert host first landed in the radio career as a newscaster with Detroit station WCAR-AM during the 1970s. He later served as a news producer and executive news producer in WJBK-TV.

George found a pace in the hosting business when he started hosting a late-night radio program called Nighthawk on KTRS in St. Louis, in 1996. His work received tons of appreciation and attention which paved his way to Coast to Coast Am at Premiere Radio Networks. He first joined as a co-host alongside Atr Bell and later took over the show following Bell’s retirement in 2003.

Interesting: Why and How do celebrities keep their personal life private?

In his impeccable career, he has garnered a fascinating net worth of $2 million which is bound to grow from his annual salary of $500,000 from the late night podcast.

How detailed his professional part is! While his personal part remains otherwise.

George Noory Was A Married Man, But What About Now?

George is one of such people who like to keep their personal matter to themselves which is a primary reason for his obscure married life.

But what we know is that the host was once a married man with a wife named Lisa Lyons whom he later divorced. He fathered three children- two daughters and a son during his married life.

Besides this, it is not known if he was married only once or more. But he remains single at this age; Or not! Well, it’s an unsolved theory only George can make clean.