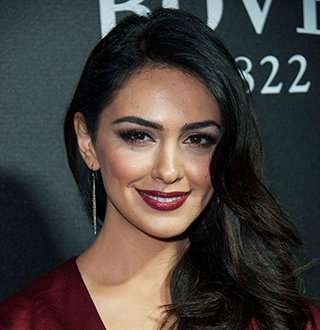 Now, Nazanin is one of the most famous actresses in Television but there was a time when she was a weak cog in the evil machinery, helpless and manipulated, and had to go through a terrible ordeal, which left her emotionally disturbed. But thanks to her determination, she got over it, found her place in the world and became what she is today.

The actress of Iranian ethnicity and British nationality is mostly recognized for her role of Nora in 2000s most famous sitcom, How I Met Your Mother, as Fara Sherazi in drama series Homeland, and as Esther is epic historical drama film, Ben-Hur. Nazanin plays Zahra in an upcoming thriller about Mumbai terrorist attacks, Hotel Mumbai.

Hotel Mumbai: Watch Nazanin Boniadi as Zahra in a thriller about attacks on Taj Hotel in Mumbai (published on 18 August 2018)

Nazanin is a little short for a British woman but probably average for an Iranian woman, standing at the height of 5' 3".

Nazanin Boniadi Is Daughter Of Revolution

Born on 22 May 1982 in Iran, when the country was in the heat of revolution, Nazanin was one true daughter of the Iranian revolution, if there was any. Her parents relocated to London, England, where Nazanin grew up.

Trained in violin and ballet at the young age, Naznin changed her course to biological sciences for her undergraduate degree in the University of California, Irvine. Later she changed her interest back to acting and performance.

After moving to acting, Nazanin's first major role was in long-running soap opera, General Hospital, as Leyla Mir, for which she was nominated for Outstanding Actress in a Daytime Drama Series in 2008.

Over the years, she has had major supporting roles in movies like Charlie Wilson’s War, Iron Man, The Next Three Days, Ben-Hur and recently Hotel Mumbai. But her forte remains television, and her most recognizable role--albeit minor-- was in CBS’s sitcom sensation, How I Met Your Mother, as smart and lovable Nora.

With all her works, Nazanin has earned net worth of around $2 million.

Now, Nazanin is one of the most famous actresses in Television but there was a time when she was a weak cog in the evil machinery, helpless and manipulated.

It is the story of the time when Naznin was a med student and a very loyal Scientologist. As a loyal member of the Church of Scientology, she was groomed to have Tom Cruise, who was a poster boy for the church at that time, as a boyfriend and possibly as a husband. Naznin was pulled out of her school, physically changed (her hair and teeth) to fit Tom’s liking, and was even forced to separate from her then long-term boyfriend. But the things didn’t work out like the church’s official had thought and instead of getting married to Tom, the two of them separated.

Nazanin Dating Life After Tom Cruise Fiasco, Is She Married To Husband?

This entire affair left Naznin heartbroken and she revealed all this to her friend, which turned out to be the worst mistake she could have done at that time. When the church’s officials found out, she was punished and made to scrub the toilet floor.

These truths were hidden behind the Non-Discloser Agreement Nazanin signed with the Church of Scientology but were hidden by HBO’s documentary, Going Clear.

After everything ended, Nazanin remained closed about her dating or married, life. Since there has been no news about her husband, it is unlikely that Nazanin, at the age of 38 now, is married.

Whatever the status of Nazanin's dating life, she did achieve great heights in her career, and that too coming on the backdrop of such a humiliation, and that is a great achievement, something that cannot be achieved by everyone.