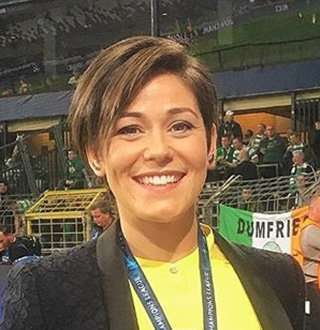 BBC Sports associate Eilidh Barbour walked the fiery road to her career with the support of her family. But did she have a mystery companion as well to support her more?

Eilidh Barbour is best known for being the main presenter in BBC’s golf coverage as she replaced Hazel Irvine in the role.

Partnering With Scarf: Eilidh Barbour explains the keepsake of her Saints scarf until it supposedly disintegrates her neck off (Published on 4 December 2015)

You May Also Like: Sally Nugent Is Married, Husband Identity & Family Facts Of BBC's Presenter

She carried a passion for football and golf from a very young age, but since she couldn’t make a career out of it, she became what was closest to a sportsperson.

Born on 14 December 1982, Eilidh Margaret Barbour was raised in Perthshire, Scotland. She graduated from the University of Stirling in 2005 having read audio and video production alongside Film and Media Studies.

Moving to South Korea to teach English, Eilidh returned to Scotland after a year to find a job within broadcasting.

It was after six months later of persistence that she got on with STV, editing their rugby and football highlights. The 35-year-old journalist took several reporting jobs before finally becoming the presenter of STV Rugby for its 2011-12 season.

Eilidh gained national recognition when she showed up as a pitchside reporter during the first round FA Cup match in a special episode of Final Score in November 2014.

Since 2016, she had been regularly reporting for Final Score until she filled in for Dan Walker as Football Focus’ presenter and was made the presenter of The Women’s Football Show the following year.

The lifelong supporter of St. Johnstone was named the main presenter for BBC’s golf coverage in 2017, replacing the major influence on her career, Hazel Irvine.

Eilidh’s Family Has Her Back Through Thick & Thin

Being a sportscaster takes a massive amount of courage to spill the words in front of a huge audience.

But Eilidh came up with a sweet trick to melt away her nervousness while reporting with thousands of audience viewing her.

Every time she’s reporting for something like the Olympics and is close to thinking about the big audience watching, Eilidh imagines her mom watching her to keep it relaxed.

But the calm composure doesn’t last long as Eilidh tells the Sunday Post,

It’s when I speak to mum later and she tells me about all the people that have seen it or have turned on the BBC in New Zealand or France, that it brings home that it’s a really big thing.

Eilidh never hesitates to give credits to her mom, dad, and brother for being immensely supportive throughout her choices. Infinite Love: Eilidh posts a picture of her mother wishing her a happy mother’s day on Instagram on 11 March 2018 (Photo: Eilidh Barbour’s Instagram)

And while every normal mother and daughter’s quality time is spent on shopping, Eilidh and her mom are more into playing golfs for their bonding time.

As much as Eilidh loves to gush about her family everytime she gets the chance, she has been quite secretive about her romantic time with her partner.

Every single fan of Eilidh is howling in anticipation about the subtle hints that she’s dropping about her romantic affair with her frequently-mentioned boyfriend.

The rumors have been going around since 2011 when Eilidh seamlessly replied to BBC Sportscaster Chris McLaughlin’s tweet telling him to ‘stop chatting up her boyfriend.’

Adding more fuel to the burning rumors, Eilidh once again mentioned her boyfriend on a Tweet, sharing her thoughts on her partner and describing her as sturdy.

For some reason she quieted down for some years, refusing to mention anything on her possible husband but yet again in 2017, she posted a collage of pictures of her holiday in Florida where she was seen with a mysterious guy.

Similarly, she again posted another collage of images in 2018 of her vacation in Mexico with the same mysterious guy. Future Husband?: Eilidh posts a collage of pictures with her possible mystery boyfriend from the holiday in Mexico on Instagram on 17 January 2018 (Photo: Eilidh Barbour’s Instagram)

And looking at the pictures, Eilidh looks quite cuddled up with the guy and the holiday seems to kind of limited to those two only. So, it might not be a surprise if she pops up with the revelation of her maybe married life with the guy.

If you’re asking why we mentioned her married life, well that’s because speculations have risen on her being married to her mystery boyfriend of 2011 since Eilidh took a long gap of years to post anything surrounding her romantic involvement.

Despite the fact that her posts indicate on her happy life with her possible husband, she still hasn't disclosed his identity so let's hope she feels comfortable enough to choose the right time to reveal her partner's details.