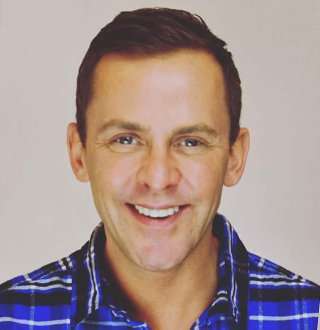 Scott Mills was in danger of fast losing everything he had because of his inability to getting over his boyfriend's tragedies. The star, however, managed to overturn his life and find himself a partner, with all the attributes he wanted.

The 44-year-old is a British radio DJ, who is a constant feature of BBC Radio 1, hosting various shows in the network. Moreover, the openly gay media personality also has a fair share of TV credits as an actor and presenter, having acted in series Casualty and River City and also hosted The Eurovision Song Contest in the UK. Work, Work: Scott Mills in his avatar of radio DJ with the BBC 1 in 2018 (Photo: thelincolnite.co.uk)

Scott Mills started as a 16-year-old DJ with a local radio network Hampshire commercial radio station's Power FM in 1990 in a low salary and the graveyard slot of 1am-6am.

The British DJ spent eight years wandering between various radio stations and acting as a voice-over artist in TV stations before joining the national broadcaster, BBC in 1998.

At the Beeb, he presented the breakfast shows, before moving to afternoon slots. He has hosted numerous hit programs with the BBC, including  The Scott Mills Show The Official Chart, and The Radio 1 Breakfast Show.

However, he has not been limited to radio and has made numerous appearances on TV. He contested in the 12th season of  Strictly Come Dancing with partner Joanne Clifton eventually finishing 11th.

You May Like: Jim Hoffer Bio: From Moments With Mika Brzezinski To Painful Divorce

Similarly, he has also presented the National Lottery Show on BBC 1 and acted in medical drama Casualty.

Scott has come a long way from being paid a meager salary with a local network to one of the highest paid stars on the radio. He is regularly featured in the top 20 highest earning artist in the radio scene and in 2016 commanded a yearly salary in the range of $250-300Ks.

Likewise, he was paid a similar amount for the year 2017 too. Added that with his earnings from other commitments, he boasts a considerable net worth. Despite having the exact figures confined, his net worth is thought to be in seven figures, making him one of the expensive radio personality.

Born on 28 March 1974, Scott had a supportive family. He started developing gay feelings in his teens and was open about his sexuality to his friends and family, who supported him.

And he decided to open up about his sexuality to the public in 2001, just three years after joining the BBC. He was afraid of the tabloid hounding going on at the celebrities life at the time and decided to front up the topic once and for all.

He came out as a gay in 2001 and has been overwhelmed with the support from not just his close ones but also his employers and listeners.

And he has been vocal about the equal treatments gay people should receive. However, it's not just the gay rights advocacy Scott is known for as he has a personal life resembling an open book. The star has always been open about his partners and has not concealed their identities.

The star was in a relationship with boyfriend Mitch during his early years. However, when his partner Mitch died of a drugs overdose, Scott felt that it was the end of the world.

He took up alcohol and was gulping down two bottles a day to get over the grievances of his boyfriend's death.

The star managed to shake off the grief after being helped by the great Robbie Williams. What's more, he found love again in the late 2013 and began dating retail manager Brad Harris.

The partners had a serious relationship, with the famous radio personality announcing in 2015 that he wanted to get married to Brad at a big summer wedding.

However, the star's second foray into a romantic relationship with boyfriend also ended in separation, with the couple announcing their parting in 2017.

Despite having two lousy taste of lovelife, the presenter did not give up on his quest to find a perfect partner.

The actor seems to have been lucky for the third time with another openly gay radio presenter Sam Vaughan. Sam, who works with the Notion radio and Scott, began dating in June 2017. A source was quoted saying to Mirror about the openly gay couple's romance in September 2017,

It's early days but Scott and Sam are really enjoying each other's company and are traveling across the country to see each other when they can. They have been dating properly for about three months and bonded over their jobs and their love for running.

After the news about their dating life surfaced, the couple has not met efforts to hide their affair, instead, have been flaunting their romance on the social media sites.

Scott Instagrammed a picture with Sam in February 2018 explaining the chilled weekend he spent with his boyfriend, Sam.

Along with that, he also Instagrammed a  picture with Sam at the Eurovision Song Contest and updated his followers that it was Sam's first appearance there.

The couple has been taking it slow and steady in their relationship. With Scott having been a part of two high profile heartaches, the couple's decision is only understandable.

Back in 2018, a commercial station, Heart Radio offered Scott to host their breakfast show. As we all know the BBC and Heart Radio are the rival station, the offer has made it exciting for the people to watch Scott’s decision.

Scott, on the other hand, is waiting for the BBC to offer him a better deal on the network itself else he is considering working with the Heart Radio. He surely loves working in the BBC as he has been working there for past twenty years. But, the commercial network offering him the work might change his career choice.

Meanwhile, the BBC network is negotiating with its board of directors department to be able to offer Scott an interesting deal so that he won’t leave the system for Heart Radio. Moreover, fans and well-wishers of Scott has encouraged him to go for Heart Radio and take the new opportunity as he might learn something new in a new environment and with the start of a new year, as in 2019, his career might take off.

The decision has not been made yet whether Scott would go for Heart Radio, or would stay in the BBC. Adding, many people are looking forward to listening to his decision cause it is a fascinating battle for a reporter between two networks.