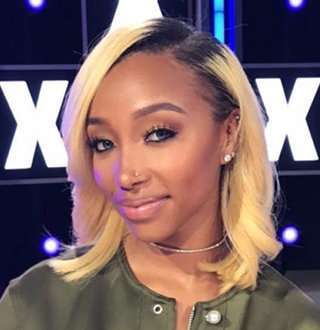 Young R&B singer, Zonnique Pullins got so jealous with Kylie Jenner’s baby girl Stormi drawing all the attention that she played on her words to get trolled on the pregnant matter. But what did she actually mean? Read on to find out. You might as well bump into her secrets that you likely are unaware of!

The singer is frequently known by her stage name, Miss Star that she earned while working in the girl band OMG Girlz alongside Bahja Rodriguez and Breaunna Womack. She went on to pursue her solo music career after the band's split. Her single Pretty Hustle is one her biggest hits.

She has been into TV screens as well, starring in Growing Up Hip Hop: Atlanta (2017).

Here is some captivating wiki about Zonnique Pullins ranging from her age, family, to boyfriend and pregnancy talks.

Miss Star was born on 20 March 1996 in Georgia. Her mother, Tameka Harris is known as Tiny in the music world and relishes her own popularity gained as an R&B singer. She was initially recognized as the stepdaughter of popular rapper T.I-real name Clifford Harris while her real dad’ name is Zonnie Pullins.

The blue-eyed diva’s family is as flawed as it is big. Her mother, Tiny and stepdad T.I have been married for many years now but they’ve had shaky grounds to their relationships. Tiny even filed for divorce in 2016 which has not been finalized yet.

The way they deal with their issues is put in the public eyes in VH1’s reality show T.I. & Tiny: Friends and Family Hustle. Screened or not! The show reflects upon personal emotion.

2. What Happened With Zonnique’s NFL Boyfriend?

Often, the reality star is appreciated for slaying bold hair colors from yellow and blue to pink and purple. Her dating life is equally colorful with a history of dating singer and rapper to an athlete.

She previously dated rapper Zoey Zuko before turning NFL player Damian Swann into her boyfriend. She had known Damian since high school days but it took her years to admit her feelings for him in 2017.

Her relationship with the athlete was short lived which ended on a sour note with the couple parting ways by early 2018 for reasons not disclosed to the public. We might as well speculate that they decided to step back to being mere friends.

The news about the singer-rapper duo being a couple was made during July 2018. They don’t show off much about one another publically, but it is evident that they love each other’s company.

Now here is the real deal. When the whole world was humming about Kylie Jenner’s adorable daughter, Stormi, Pullins thought of an idea to shift the attention.

You May Like: Nikki Grahame Married Life Far Away; She's Juggling Boyfriend At Age 36

She took on Instagram with paradoxical posts suggesting pregnancy and child talks during March 2018. When asked for clarification in The Real, she has her deal to spill.

I had a child his name is Whiskey, he is a puppy, for everyone not to be confused.

Yes, she meant her pet puppy when she said, child. Meet Her Baby: Zonnique posted a picture with her puppy, Whisky on June 5, 2018, with a caption reading 'with child' (Photo: Zonnique Pullins' Instagram)

That was a nice try to beat Kylie. But she better keep herself from competing against Kylie in finance cause her $100,000 net worth is a penny in comparison to Kylie’s $900 million.

5. It's Not Only Zonnique's Hair That's Coloured!

Apparently, the reality star has an obsession with color. Her colorful take on hair has everyone captivated and now that the secret has been revealed about her colored eye, she is collecting more attention than ever.

Many were already aware of the implant surgery she did back in 2015 to get her eyes colored into grey. But to those who were not aware of the fact, it's a secret revelation that probably left them shocked as she has undergone reversal surgery on November 2018. The revelation was made in the recent episode of T.I. & Tiny: Friends and Family Hustle where she was seen on a bed rest after the surgery.

Continue Reading: Susie Hariet, Dan Stevens Wife Bio: Who Is She & What's Her Net Worth?

Pullins followed on her mother's footsteps to get the implants. Her mother is doing so far so good with the changed eye color. But her eyes could not pull off the changed color as easily in the long term. She had to get the reversal surgery in order to avoid any permanent damage. She started to face problems with vision and experienced uncomfortable pressure in her eyes that alarmed her of possible permanent damage.

If someone asks her for any recommendation to get the fancy implants, it'll be a no-no from her side!