Media
by HM Writer Published:  December 19, 2018
Being a media person herself, Claire chooses very little information about her...t we got a chance to have a glimpse of her wedding from...The 35-years-old TV journalist Claire got married to...Claire doesn't hesitate to flaunt her love for her husband on...Claire found out that she is going to become a...

Claire Kellett is an award-winning television journalist who has worked for KMOV and many other news networks. The News 4 anchor had won a regional Edward R. Murrow Award and an Emmy Award for Breaking News Coverage. She even co-hosted an Emmy-winning Thanksgiving Day Parade and worked as an anchor in The News 4.

Claire Kellett celebrates her birthday on every 1st of July. She was born in 1983 in Missouri, United States. She has two siblings; one brother and a sister named Christopher and Mags. However, any more information regarding her height, family and measurements are nowhere on the internet.

As a family tradition, Claire attended high school at Nerinx Hall High School. She earned her Bachelor’s degree in Journalism from the University of Missouri. Later, she minored in Political Science as well.

After that, the 35-years-old Claire’s journalism career kicked off in New York City where she first worked as an intern in CNN, America Morning. She then went to work for KOMU as a general assignment reporter at Columbia. After working there for a while, she left to join KCRG-TV, ABC affiliate in Cedar Rapids. Later in 2010, she joined KMOV as an anchor.

When it comes to Claire’s salary, KMOV employees earn an average salary of $77,530, with top earners having more than $115,507. As she has been working at KMOV for many years, we assume, her salary to be around more than the average.

Claire’s Flaunts Her Love For Husband In Social Media

Being a media person herself, Claire chooses very little information about her personal life to be out in public, yet we got a chance to have a glimpse of her wedding from the blog post of L Photographie St. Louis wedding photography.

The 35-years-old TV journalist Claire got married to Jared back in 2015 at The Old Cathedral in front of their few close family and friends. Although the detailed information about her wedding was out in public, she hardly posted any info about her husband on her social media. (then) Husband: Claire poses for the camera along with her husband Jared at the event, Independence Center St. Louis (Picture: Claire's facebook)

Claire Blessed With Her New Member In The Family

The year 2017 had stored a lot for Claire and her husband, Jared. The couple got the best news of their life when Claire found out that she is going to become a mommy of a baby boy. She posted a picture of herself, holding the baby bump mentioning that she and her husband were very excited to have their first child. She also thanked everyone who sent them kind words and wishes and let the world know that their baby due was on May.

Get Along: Clarissa Ward Bio: Happily Married To Husband, Adds Baby To Family 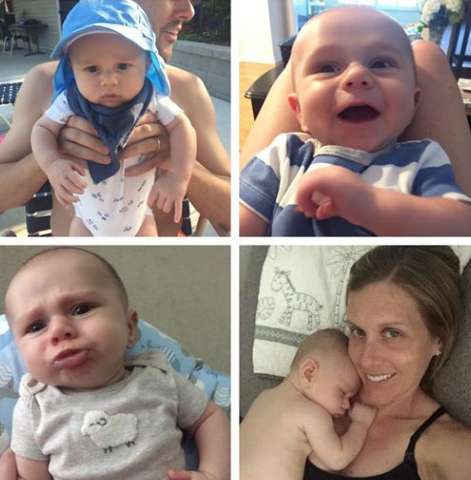 Baby-Mommy Bond: Claire was posing along with her son, Corny. (Picture: Claire's Facebook)

Claire and Jared's son entered the world and later on September 2nd, she posted a picture of her baby boy, Corny, explaining why she was away from the social media for so many months. She mentioned she took the maternity leave and truly soak up every second with her son. The new member in their family has added tremendous joy in their life.