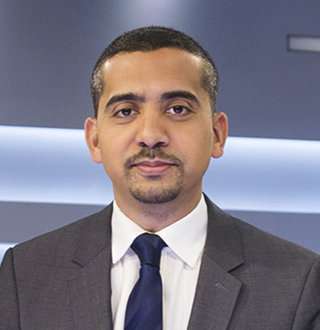 Journalists are that personnel who remain behind the fold during the process of relaying information to the viewers. But Mehdi Hasan, an award-winning British journalist, likes to keep himself among the columns, sometimes even getting into the hot water for his rather elaborated opinions and comments,

Mehdi Hasan, an award-winning British journalist broadcaster, is best known as the anchor of Al Jazeera English programs ‘The Cafe’, ‘Head to Head’ and ‘upfront.'

Furthermore, he never misses an opportunity to share his opinion on every topic that relates to Islam, terrorism, religion, women portrayals, also political issues. Though Mehdi’s outspoken nature and comment often lead him into many controversies, he is still considered an excellent journalist.

Crave to know more about personal as well as professional life of this scandalous journalist in detail? Then follow us through the context!

Mehdi Hasan, who celebrates his birthday on 10th July 1979, belongs to the British Indian background. His parents are originally from India.

Hasan attended Merchant Taylors' School, a day independent school only for boys in Three Rivers District of Hertfordshire. He then got graduated in 2000 with a degree in philosophy, politics, and economics from Oxford University. Mehdi stands at the approximate height of 5 feet 7 inch,

Mehdi Hasan Career with BBC, Al-Jazeera & His Net Worth

The remarkable journalist, during his early life, served as a researcher and producer on LWT's Jonathan Dimbleby program. He also worked for BBC 1’s ‘The politics’ and later became the deputy executive producer of the popular show,’ Sky’s breakfast show Sunrise.

Mehdi currently hosts Al-Jazeera English current affairs show ‘Up Front’, current affairs discussion, debate and analysis programme, based in Washington, D.C. He has been listed in the annual list of ‘The 500 most influential Muslims’ in the world and also named as one of the 100 most influential Britons on Twitter. Hasan was also awarded the Services to Media award at the British Muslim Awards in January 2014.

Mehdi Hasan is not only an award-winning British journalist, broadcaster, and political commentator but is the author of two books: a biography of former Labour Party leader Ed Miliband, and an e-book on debt and the financial crisis as well.

In 2018, Hasan started a podcast named 'Deconstructed', also featured on the investigative journal The Intercept. The main concept of this podcast is to cover recent news and events happening all over America.

The news may differ from police shooting to social inequality, to President Donald Trump activity, and more. The additional feature of guest star appearance is also included to make it more glamorous.

With all his professional exploits, it remains sure that he has accumulated a huge sum to his name. Still, like his personal life, the exact knowledge of his net worth and his annual salary is still under the wraps.

Mehdi has always been a secretive person to disclose his private matter in the media maybe that’s why people have less idea about his love life.

Judging by his social media, the journalist has often addressed his wife in his articles and Twitter post. Back in 2015, he once tweeted that he and his wife went out for dinner in DC. It has been cleared from the Twitter that he is a married man despite the fact that he has not disclosed the names and details of his wife.

According to an article published on HuffPost back in 2014, he has a seven-year-old daughter. He used to mention her daughter frequently in his features and blogs. But just like his wife, Mehdi has not disclosed the name and other details of her daughter.

Moreover, Mehdi is too concerned about her daughter and family who always have to face difficulties because they belong to the Muslim community. In one of his articles, he has mentioned that he has no idea how to tell his daughter that the new president Donald Trump doesn’t like them because they are Muslims.

You May Like: Geoff Tracy Biography: Age, Wife And Family To Net worth Of Restaurant Owner

Mehdi’s married and family life is kept hidden maybe because of the controversies he often falls due to his outspoken nature and comments. Nevertheless, a majority of fans are waiting to know more about his family life and how he manages his private time with his daughter and wife.