Retired FBI Agent James Fitzgerald Personal Life | Once Married, Wife To Be Is A Stunner Retired FBI Agent, James R. Fitzgerald was mostly known for cracking the case of Unabomber, Theodore John Kaczynski. Many people had heard of the Unabomber, but many had not even heard of the man behind the case, Fitzgerald.

The former FBI honcho was again in the news after Discovery’s new 2017 series ‘Manhunt: Unabomber’ put the spotlight back on Fitzgerald. He was the man who led the FBI on an 18-year manhunt for one of the most notorious criminals in the modern history.

The Olney native had a long stint at law-enforcement before moving to the FBI.

The forensic linguist was born on June 24, 1953, and raised in Olney, a middle-class Philadelphia neighborhood. His father worked for Philadelphia Gas Works, while his mother was a stay-at-home mom.

According to the wiki, he parlayed his degree as a store detective and eventually became a police officer in Bensalem. After a distinguished 11-year career, James decided it was time to take a move to the FBI, later graduating from the FBI Academy In Virginia.

Fitzgerald returned to Quantico for more training and a position that changed his life.

While serving as a criminal profiler for the FBI, James’ team investigated cases while took on the headlines across the United States, including the Unabomber, The DC Sniper, and Jon Benet Ramsey.

FBI Duty Led To End Of Married Life With Wife

Before getting posted on the Unabomb Task Force, James was married. However, having to round off one of the most cunning criminals in the history of US took its toll on his married life. Long estrangement from his family, spelled an eventual divorce with his wife.

James and his wife had three sons from their marriage before their divorce. And in 2017, he became a grandfather as he welcomed his granddaughter in his family. 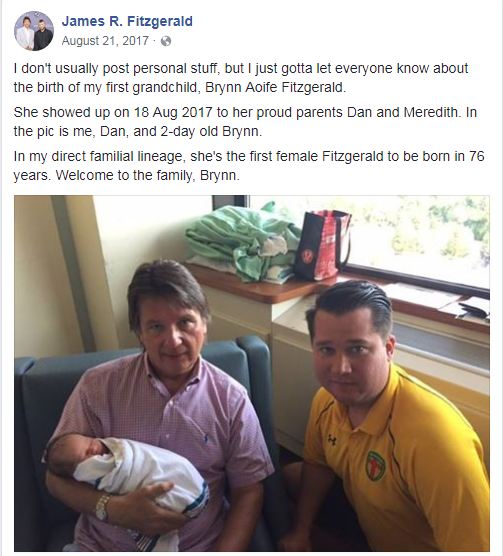 Newest Member Of Family: James holds his granddaughter and poses for a picture with his son, Dan on August 21, 2017 (Photo: James R. Fitzgerald's facebook)

He took to Facebook to shine the light on his hidden personal life, saying his granddaughter was the first girl to be born in 76 years in his family lineage.

James held a book signing event on 8 August 2018 for the third installment of his book series, A Journey To The Center Of The Mind that came out in 2017.

The third volume continues the story of James' progression in Law Enforcement at the FBI Academy in Virginia, showing his involvement in the arrests of murderers, kidnappers, and pedophiles.

The arrests resulted in his promotion as a Criminal Profiler. The book concludes with James' first assignment as a profiler with the UNABOM Task Force in California.

James announced the book signing event on his Facebook along with the location of The Avalon Public Library where it was held. He also mentioned that the entry would cost nothing. A Successful Event: James posts a picture on Facebook regarding the event's success on 9 August 2018 (Photo: James Fitzgerald's Facebook)

The event was not only just a book signing but James wanted to be more familiar with his fans. Eventually, it turned out as a smooth meet-and-greet event.

And through his post via Facebook, He mentioned how much he enjoyed talking to the people who attended the event.

After the divorce from his wife, James has found love again.

The criminal profiler, aged 65, is together now with fiance, who looks just as stunning as the on-screen fiance of the show.

Natalie Schilling is an author and Professor of Linguistics at Georgetown University in Washington, DC, and is the newest love of James' life. She is portrayed in the series, ‘Manhunt: Unabomber’ as the linguist professor who helps Fitzgerald’s character to find the key to Kaczynski’s writing. However, in real life, she was never actually involved in the case though. 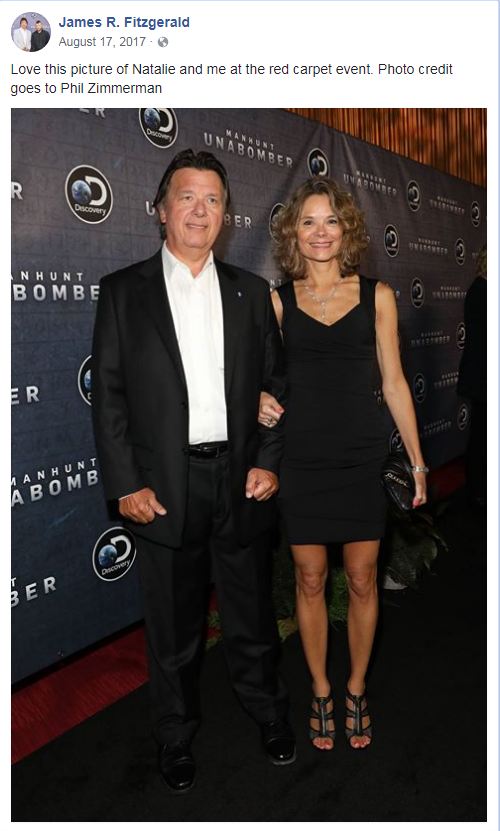 Black's The Color: James poses for picture with Natalie at the red carpet during the premiere of Manhunt: Unabomber on August 17, 2017 (Photo: gettyimages.com)

The pair is often seen together attending events. And even though he doesn't talk much about his personal life, Fitz posted a picture with his fiance on Twitter on November 27, 2014.

Theodore John Kaczynski aka Ted was a very careful domestic terrorist and a mathematics genius. He never left behind any traces of his mailed bombs that cumulatively killed three people and injured twenty-three between 1978 and 1995. But he did purposely leave behind misleading clues in them and called them his manifesto.

The detailed study of the manifestos led to the uncovering of the criminal mastermind.

According to now-retired FBI Agent James, deduced certain facts about the cold-blooded murderer from his manifestos. James found out that the criminal was ‘obsessively careful’ in writing, frequently causing minor mistakes like a coma after the sentence or the exclamation mark that was supposed to be a question mark. James said about Ted:

‘So I realize this guy, while I wasn’t clinically diagnosing him, there was almost like a language OCD this person had. And that was helping me sort of put together who this person was.’

Eventually, Ted Kaczynski’s sister-in-law recognized the ideas and writings and revealed his identity to the FBI.  Her husband didn’t believe her at first, but the term that finally convinced him was a quote, “cool-headed logician,” a term Ted used during his college days.

After successfully locating his cabin, Kaczynski was arrested and is still serving a life sentence in prison.