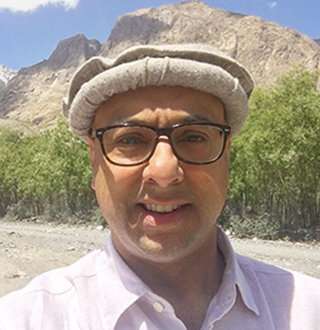 Canadian television journalist Ali Velshi's married life served as an example to many. In an age where stories of failed long distance relationships are littered everywhere, Ali and his wife would not beg to differ.

The Kenya native was one of the most known faces on TV screens after hosting the popular news program Ali Velshi On Target on Al Jazeera America. His fame enriched when he joined the MSNBC as a senior economic and business correspondent for NBC News in 2016. The 48-year-old was in the news recently for dissecting how the Trumps were pocketing the taxpayer's money into their own as part of their business strategies.

Ali graduated in religious studies from Queen's University in 1994.

He initiated his Journaling career as a reporter for a local Toronto station. In 1999, Ali started working for a Canadian business channel named Report on business television.

Subsequently, he traveled to the United States in 2001 and started working as a reporter for the CNNfn until the channel collapsed. Afterward, he landed as a host in the CNN network’s show DayBreak.

In 2006, Ali started working as a business correspondent for the show American Morning. During his time at the show, he was appointed as the anchor of Energy Hunt for which he visited various places.

He also covered numerous stories such as the bombing of the Marriott Hotel in Islamabad, the destructive hurricane Gustav, the global financial crisis that occurred in 2008 and also the devastating hurricane Sandy that striked in 2012.

Later, he left CNN and moved to new channel Al Jazeera America’ in 2013. There he hosted the show Real Money With Ali Velshi and Ali Velshi On Target. Afterward, he joined MSNBC and NBC as an anchor and business correspondent.

Ali Velshi's Salary And Net Worth

The average salary of an anchor in the MSNBC is estimated to be $52,029. With Ali having huge experience in the field of journalism and having already hosted a prime-time program at Al-Jazeera America, he commands a much higher salary with the network.

His salary and earnings have rewarded him with a huge fortune. Despite having the exact figures concealed, the bald anchor is thought to boast a net worth in seven figures.

Ali, who was born on 29 October 1969, hails from a family belonging to Indian background.  Ali is a practicing Muslim and belongs to Gujrati ethnicity.

His father, Murad Velshi was an Indian businessman who served in  Africa and Canada. It was during his stay in Africa that Ali was born. His mother'a name was Mila.

Ali comes from a family of political background as his father was the first Indian origin man to be elected to Canda's legislative assembly.

He Was Previously Married In His 20s

It has come to light that Ali had first married when he was in his twenties. The marriage was shortlived, and he had a divorce with his first wife shortly after getting united.

The details of his first wedding and the identity of his first wife remains a mystery as Ali has not uttered any word on the context.

After his first marriage turned sour, Ali still had the penchant to get married which led him to his current wife.

Ali is blissfully married to the president of Philadelphia-based ‘Cross Ledge Investments, Lori Wachs. The couple first met when Lori came to Ali's show back in early 2003.

After the first meeting, the duo dated for some years. They eventually tied the wedding knots and got married in 2009 in a low-key ceremony. Lori, like Ali, had been married previously and shared two kids with her previous husband.

Back in November 2014 during an interview with the Phillymag, the pair disclosed that their marriage was going well. Ali gushed about his hectic schedule and explained that he manages time for his wife by meeting her every weekend. Pearly White: Ali Velshi and wife Lori Wachs is all smiles as they pose for a photo (Photo: phillymag.com)

As of now, the pair is maintaining a low profile looks to their married life, and keeping their family matters out of the eye of media.