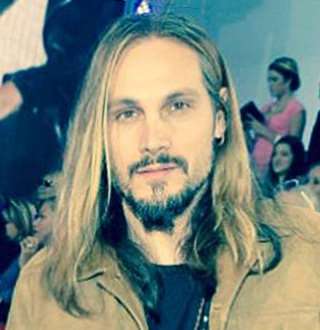 Rising from scum to popularity and from being a waiter to marrying the Avatar’s Neytiri, Zoe Saldana, fair enough to say, Italian Artist, Marco Perego has had one hell of a ride in his life.

The Italian native first came into limelight when he painted the background of renowned fashion designers, Dolce & Gabbana in “Where the Fashion Meets Art” campaign. Ever since then, Marco aka The Pirate has been able to garner a lot of fame for himself whether it be as an artist or it be as a husband of famous wife.

Here are some fascinating wikis about Marco, covering about his early struggles to being a pioneer in the field of art, blue-collar family, and his relationship with famous actress Zoe Saldana.

The Pirate was born (1 March 1979) to a blue-collar family in Italy; his father was a waiter, and his mother was a homemaker. Having spent his childhood in Italy, Marco resides in New Jersey with his family.

He belongs to white ethnicity. His impressive height of 5 feet 11 inches has supplemented his muscular physique.

From a very early age, Marco enveloped a lot of interests in art.

2. Marco Perego's Journey To Get The Pinnacle Of Art

Marco Perego has had to go through a lot of ups and downs on his journey to get to the pinnacle of art; starting as a football player to being a waiter and then to become one of the fine artists.

At just the tender age of 17, Marco was selected as a soccer player in Venice professional team. Despair for the young lad as he had to give up on his playing career after suffering a foot injury.

Recovering from the injury, he moved to New York instead of carrying on his career. Initially, he struggled to get into life and even had to work as a busboy and a waiter.

But all these struggles were setting the ladder for his childhood passion; art. And it was in 2007, that Marco first sold his first painting to his friend who motivated him to focus more on his artistic career.

Just a year later, Marco made a big breakthrough in his artistic career; he painted the background of renowned fashion designers, Dolce & Gabbana in “Where the Fashion Meets Art” campaign which instantly became famous.

Since then, there has been no turning back as the artist has been keeping it up to his standards with great arts which have sold for about $30,000 a piece.

Moreover, "The Never Giving Up" persona has writing credits to his name for Burn to Shine in 2015 and has also produced a movie like Me + Her in 2014.

3. The Pirate's Net Worth In Millions?

Marco, despite struggles in early phases, has been able to surmount a remarkable net worth. He's earned fortunes from his artwork and collaboration with one of the well-renowned Fashion designers, Dolce & Gabbana. However, his actual net worth remains under the rocks.

The Pirate, Marco Perego married Neytiri of Avatar, Zoe Saldana in a secret wedding in June 2013 in London.

After the marriage, the cute couple adopted each other’s surname as Macro became Marco Perego-Saldana and Zen became Zen Saldana-Perego. Family Bliss: Marco & his wife get well suited in their attires for a photo (Photo: Marco's Instagram)

You Do Not Want To Miss: Jane Pauley Speaks About Her Health – From Illness And Sickness She Suffered!

With the addition of children in their family, Zoe and Marco, have made their relationship even stronger. The cute couple keeps flaunting their love life in social media.

As of now, the family of five are happily residing in New York.