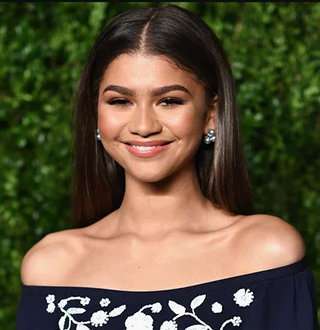 Being inspired by others and inspiring others are two very different acts. It might not be that big of a deal to perfect the former while coming even close to the latter is a big achievement on its own. And 22-year-old multifaceted persona Zendaya is a select few who falls in the latter category--inspiring millions despite her tender age.

California born actress gained significant recognition in the entertainment industry in 2010 when she twined with Bella Thorne for popular comedy series, Shake It Up. Her portrayal of Rocky Blue became a big hit and granted her a place in Disney's’ Zapped in 2014.

Show Time: Zendaya talks about how she built up upper body strength - and trust - to do trapeze with Zac Efron for The Greatest Showman and shows footage of one of their many bloopers from filming (Published: 12 December 2017)

There are more in the store when comes to the versatile young lady. She competed in ABC's Dancing With The Stars in its sixteenth season and finished as a runner-up. She has shown her aura in acting through her debut in Spider-Man: Homecoming in 2017.

Moreover, she also starred in one of 2017's biggest hit, The Greatest Showman that also starred Hugh Jackman and Zac Effron.

Born on 1996 in Oakland California, Zendaya celebrates her birthday on 1st of September. She was born to parents Kazembe Ajamu Coleman and Claire Stoermer and her full name, Zendaya Maree Stoermer Coleman is inspired by her father’s heritage. Her full name thus is an ode to her father and his forefathers.

Her father belongs to African-American roots while mother comes from German, Irish and English ancestry, which gives her a mixed ethnicity.

The mixed racial actress’ first name means to thank in the Shona language of Zimbabwe. Having a name originated from her ethnicity didn’t spare her from racial comments irrespective of the beauty in its meaning. But she handles the crude comments with a maturity of 60 years old. Defying her young age, she is a perfect example of resilience in the era seeking equity.

When it comes to striving the change, age just numbers for this young woman.

Zendaya is a master at winning hearts but who is the one that mastered winning her heart? On this regard, Z’s not so out, and about perspective on her dating life is not helping dig out the information.

The actress is a pro at keeping secrets, or else the public would have known about her secret boyfriend whom she dated for legit years. The secret dating initiated in mystery and terminated the same way during 2015. What remains is her puppy Noon, a gift from the secret boyfriend, with whom she is no longer together.

Sexy In Bikini: Zendaya dons a yellow bikini with her pet dog Noon-gifted by her former boyfriend (Photo: Zendaya's Instagram)

Dooming the first love was tough for her but it seems like she got over it to spark the feeling with another guy. This suspicion nearly turned valid when she exchanged 2015 Valentine’s wish with fellow TV personality Trevor Jackson.

Had Trevor been anything near to Z’s icon Michael Jackson, she would have never let him go. But turned out they are not in contact anymore, not even on social media.

Is Zendaya Dating A Boyfriend In 2018?

With the young star remaining mum on her love life, all that the public can do is speculate on whom she could be dating.

Though there has not been headline-making dating revelation for her, the bold and sexy actress doesn’t mind offering the freedom to postulate her boyfriend.

Her character on the Spider-Man: Homecoming buzzed on screen in 2017 with rumors of the movie’s star Tom Holland being her boyfriend setting a fire in the media. Can’t have a say what Zendaya, but Tom sure adores the rumored girlfriend, as his Instagram post on her birthday suggested.

With the two now busy filming for Spiderman: Far From Home, maybe the couple's relationship takes a hike--or that's what we here are hoping for!

Zendaya Net Worth: Multi-Millionaire At Age 22

The multi-talented American star has earned enough accolades at a young age that she has now become an outright inspiration to the youngsters.

She seized on her chance of modeling and has slowly morphed into a showbiz star through singing and acting. Not just that, her professional success seems too good to be true. Else, who could have thought of a mixed-race girl who used to sneak into her mother's office to watch plays to becoming the next big thing in Hollywood and acting in Marvels Movies.

Her net worth of $5 million sure shouts the proof. Not satisfied, there are numerous stories littered on the internet of parents encouraging their kids to be like Z, and perhaps even she has the potential of influencing the grown-ups as well.

Zendaya is a treasure of beauty along with purpose. No doubts young girls would want to be like Zendaya when they grow up, talented, hardworking and filthy rich!!!