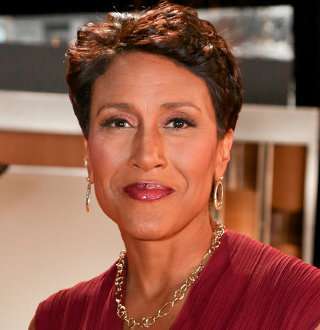 Mississippi native Robert survived the most difficult battles of her life, and her partner has been the one to be right beside her through every step.

Robin Rene Roberts is an American television newscaster widely popular as the anchor of ABC’s Good morning America. She was a sportscaster on ESPN for over fifteen years. Her treatment of Myelodysplastic syndrome was broadcasted on the television, which received a 2012 Peabody Award for the coverage. Born on 23 November 1960, Robin Rene Roberts was raised in Pass Christian, Mississippi. She graduated as the class of 1979 Salutatorian from Pass Christian High School.

Attending Southeastern Louisiana University in Hammond, Louisiana, Robert graduated with a degree in communication in 1983.

Following her sister's footsteps, Robin began her career in 1983 as a sports anchor and reporter for WDAM-TV in Hattiesburg, Mississippi. She joined ESPN as a sportscaster in February 1990 and served the network till 2005. Then, Robin was promoted to co-anchor Good Morning America.

On 19 May 2018, she co-anchored the historic wedding of Prince Harry and Meghan Markle.

Robin's Battle with Cancer and Opening About Sexuality

The morning show anchor’s life has not been as easy as it seems. She is the survivor of multiple dangerous diseases. In 2007, Robin underwent breast surgery and beat her breast cancer. Not only that, in 2012, she was even diagnosed with MDS (Myelodysplastic syndrome) a disease that attacks the blood and bone marrow. Fortunately, she survived it after her sister donated bone marrow to her.

Robin, 57, has been very open about her health battles, but she did not speak about her sexuality until 2013. She announced that she was a lesbian through a Facebook post in December 2013. She also spoke for the first time about her long-time girlfriend Amber Laign, a California transplant and a licensed therapist with her practice.

Robin has been with her partner Amber, 44, for a long time. Robin and Amber first met through mutual friends in 2005 and are still going strong. The News anchor and Amber have been together for over fifteen years now. Even Michelle Obama cheered the lovebird’s long-term relationship.

In 2013, she mentioned her girlfriend in the Facebook post where she thanked her, friends and doctors for their support to overcome her health battle. Amber supported Robert’s several trials, tribulations and health issues.

In 2014, Radar Online reported that Robin planned to marry her love over the holidays and become husband and wife. But the news just disappeared without any decent updates. As of now, they have not declared any news regarding their marriage plans. Currently, they reside together in New York City.

All Hands In Good Deeds

Robin does not step back when it comes to spreading her arms for good deeds like helping the ones in need. She often participates in charitable organizations donating money and making small differences alongside her partner. On 4 August 2018, Robin went to participate in the 20th Anniversary as a host of The V Foundation Wine Celebration, a world-class wine event that benefits The V Foundation for Cancer Research.

The goal of this organization dedicates to finding cures for cancer and since its initiation, the three-day event has raised nearly $90 Million.

Robin took to Instagram to announce the event and thank the people for taking the time out of their busy schedule to attend the event. Aside from the event itself, the fact that Robin attended it with her partner, Amber shows how deeply they share their drive to help those in need.