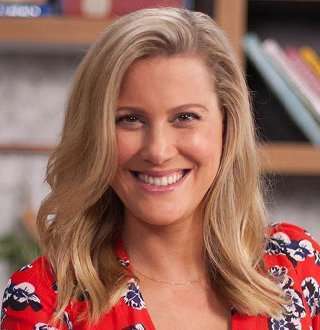 Australian chef, Justine Schofield having gone through a rough time with her relationship found ultimate comfort in her family's new additions' arrival.

Justine Schofield is best known as a former MasterChef contestant and the host of the Network Ten’s cooking show, Everyday Gourmet which was broadcasted first in 2011.

Here are some captivating wikis on Justine Schofield’s age, family, her cooking show and possible romantic affair with her partner.

Born on 29 October 1985, Justine Schofield was raised in Sydney, Australia along with her younger brother, Lawrence.

You May Also Like: Amanda Balionis Bio: Age 32 & Engaged To Boyfriend Or Just A Spoof?

She was set on pursuing a career in cooking after earning her degree in hotel management. Having competed in the first season of MasterChef Australia, Justine set out to run her cooking show, Everyday Gourmet with Justine Schofield.

The show was first broadcast in 2011 and has aired over 600 episodes in seven seasons as of 2018. In the show, Amanda showcases home cooked recipes from simple to complex.

Having had a successful MasterChef path, Justine became a presenter at Australia’s major food events. She’s also the author of her cookbooks, Simple Everyday and Dinner with Justine.

Coming from a family that revolves around food and secret recipes, Justine was always passionate about cooking, especially since her mother and grandmother excelled in classic French cuisine.

As a kid, she used to spend the weekends in the kitchen cooking with her mother or delving into cookbooks instead of playing with the kids in the neighborhood.

Justine even used her mother and grandmother’s recipes for pastries on MasterChef and remembered them by heart.

Her mother had even opened a restaurant in Bowral and had a French recipe book that Justine still uses at times.

Even at the time when she bought her place, Justine put her primary priority on the dining table as she believes that food brings people together.

In February 2018, Justine announced the arrival of her brother’s triplets at a Brisbane hospital on Instagram.

The triplets having only been born for six months, they’ve got their own Instagram profile under the name, Theschofieldsquad. Justine often posts pictures with her cousins and calls herself ‘AuntyJuju,’ which is kind of adorable as she shows so much love for the babies.

She’s entirely taken the role of a sweet aunt who’ll give the babies anything they demand from her.

Justine had been dating Channel 7 news presenter, Matt Doran for more than two years. The pair were maintaining a long-distance relationship going back and forth between Australia and the US.

Justine especially made extra effort to travel to the US as much as she could to meet her boyfriend.

Most people in long-distance relationships don’t wait much to get married to be with their partner more. But it was a different case for Justine and Matt as the couple ended their relationship in 2017 after the challenging and tiring course of traveling and dating for two years. The pair may have parted ways, but they haven’t deleted the pictures they shared together on social media.

Since the break up with Matt, Justine hasn’t entirely revealed much about her romantic affairs. And since she’s already 32 of age, she might be getting ready to find the perfect partner and get married soon.

After parting ways with her partner of two years, you might think that Justine might be all droopy eyes and frowny. But, that's not how Justine deals with her pain of separating from her loved one. She didn't take long to move on and is living her life to the fullest.

Being a chef, Justine has bent to enhancing her career more and her new show, Tropical Gourmet Queensland made its debut on 3 September 2018 on Food Network Australia. Adding to that, she has been giving herself more refreshment with lots of vacations, and she doesn't step back to share those moments on her Instagram. Rocking Bikini At Her Age: Justine poses for a picture as she embraces the breeze of Costa Smeralda, Italy on a boat on 7 August 2018 (Photo: Justine Schofield's Instagram)

On 25 August, Justine didn't hesitate to share her skiing vacation moment with her close friend, Christina Larkin on Instagram. And let's not forget about her main source of joy, her triplet cousins. Her brother and his family visited Justine's home in Australia, and the chef couldn't help but gush about the triplets' first visit to Sydney.

Overall, Justine is not letting the break up with her partner get to her head as she is enjoying her life two times more and making the best of the valuable moments with her friends and family.